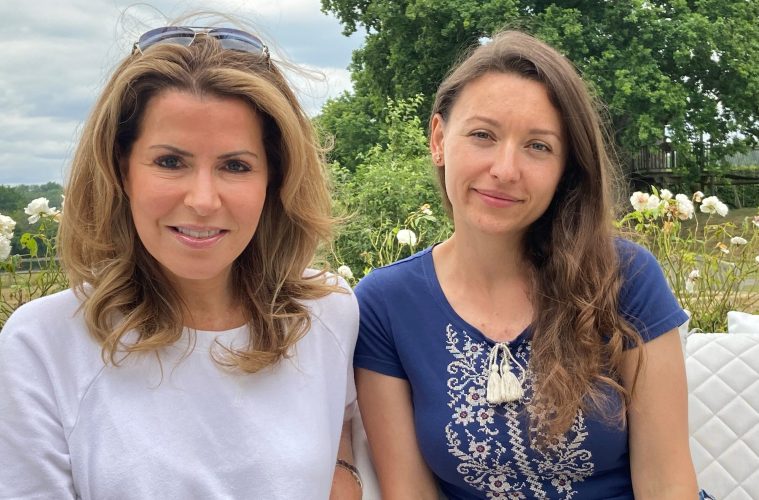 MORE than 600 host families across East Sussex have welcomed those fleeing the war in Ukraine into their homes.

1,000 Ukrainian guests have settled in the county since the launch of the government’s Homes for Ukraine scheme in March.

Since the start of the war, many Ukrainians have fled with few possessions, leaving behind family and friends not knowing when they will be able to return.

Television presenter Natasha Kaplinsky, who lives near Fletching, is hosting a family from Lviv. She had very personal reasons for wanting to help, and said there was no doubt in her mind about opening her home.

Natasha said: “I come from a family of refugees. My father was a political refugee from South Africa and our family fled Europe in the Second World War, so taking in a family was just something I had to do.

“I am very privileged to have the space and there was no question in my mind that I needed to do whatever I could to help.”

Natasha helped to establish a community group which has found homes locally for a large number of Ukrainians, and was contacted by Anastasiia following a message Natasha posted on social media.

After deciding to leave Ukraine, Anastasiia and her family travelled by bus for 24 hours to cross the border into Poland with just a backpack each, sitting between the seats because the bus was so full.

Although the family are relieved to be safe in Sussex, they miss their life in Ukraine.

Natasha said: “They are the most amazing family and we love having them but they want to be at home. They have left everything, everything they have worked for has just gone.”

Anastasiia and her husband Yarrick ran a very successful Aikido school in Ukraine and feel guilty about leaving. Their students write and ask them when they are coming back.

Anastasiia continued: “It is bittersweet for us. Natasha’s family have been so kind and lovely to us. We are really lucky to be here and are very grateful.

“But every morning I wake up and think ‘is it a dream?’. Then I realise it’s not a dream and this is where we have to live now. It’s really hard to be in another country especially when you have not planned to leave.”

Across the county Sarah Whittaker, who owns an equine vet practice with her husband Reuben, have welcomed a family from Kharkov to their home in Northiam. Sarah’s grandmother fled Germany as a refugee and Sarah wanted to do something in recognition of the help she received in England.

Sarah says: “Reuben and I were keen to help if we could. If we were in the same situation we would hope someone would do it for us.”

Anna and Timur had a happy, successful life before the invasion, running a chain of heating equipment shops.

Anna said: “A couple years ago we built a new house and were excited about the upcoming summer and planting our garden.”

The family realised they had to leave their home after waking to the sound of explosions on February 24. They travelled to central Ukraine but decided to leave a month later following an explosion at a nearby oil refinery.

Anna explained: “It is impossible to live a normal life when you have air raid alerts several times a day and have to stay in a bomb shelter all the time.”

After registering for the Homes for Ukraine scheme, Sarah found Anna through social media and the family arrived in the UK after driving 2000 miles across Europe.

Anna said: “At first it was very strange not to hear air raid alerts, to see normal life and not be afraid when going to sleep. Sarah and Reuben have been so kind and we are happy that we can live here in peace.”

Although Anna and Timur want to return to Ukraine one day, they are determined to make a life for themselves in East Sussex. They have set up a tack cleaning business and are planning to start a catering business selling Ukrainian food.

Anna continued: “We really hope that we can go back home one day, but unfortunately our country is being destroyed because of the war and nobody knows when it will end.”

Sarah added: “We are really humbled by how positive and hard working Anna and Timur are, after all they have been through. We are so pleased that we can help in our small way.”

Cllr Keith Glazier, leader of East Sussex County Council, said: “The community effort to help settle those fleeing the conflict in East Sussex has been tremendous, and I would like to thank all our residents for their help and support.”

East Sussex County Council recently set up the Homes for Ukraine Community Support Grant Fund to distribute £490,000 to Voluntary Action groups to help them support the work of local networks and community hubs. The council is also providing laptops and a Ukrainian language welcome guide to Ukrainian guests.

More information on how East Sussex is supporting Ukrainians fleeing the conflict and what people can do to help is available at https://www.eastsussex.gov.uk/community/supporting-refugees/ukraine.