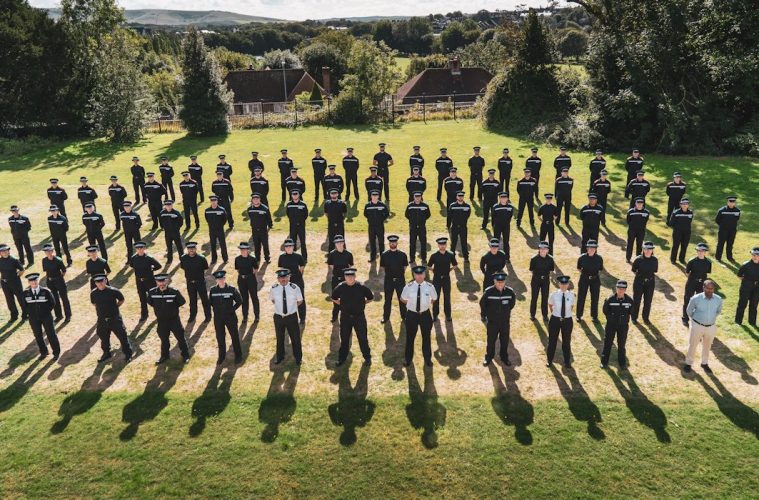 Seventy-two new recruit constables have taken their first steps in policing this week.

The new recruits were formally sworn in as police officers on Tuesday (28 September) at an attestation ceremony. The new police officers join as the force opens for recruitment once again.

Chief Constable Jo Shiner said: “Welcoming new recruits into our policing family is always a highlight for us.

“To welcome such a large cohort this week has been fantastic. I thoroughly enjoyed the opportunity to personally address the officers today, and look forward to seeing them progress as they embark upon their training. It’s particularly special this week, as we welcome our new officers, whilst also opening recruitment for their colleagues of the future.

“Policing really is a job like no other, offering the chance to not only change your own life but that of countless others who you support. Every day I am humbled and proud to hear of the incredible achievements of our team and the impact they make on their communities.  This can’t be underestimated and I am delighted that we are able to grow our team with more police officers, to strengthen our impact by protecting communities, catching criminals and delivering an outstanding service.”

19-year-old Hannah Wheatley from Worthing worked as a customer service assistant before joining and was a member of the Adur & Worthing Police Cadets from the age of 14. She says: “Whilst in the Police Cadets I was so inspired by my leaders when they told us about their work as officers and I knew from day one it was what I wanted to be.

“The feeling of putting on my uniform each week and being part of Sussex Police made me feel so proud. I loved every second of it, and it became some of the best few years of my life. Now, I hope to become a role model in the community and to help in preventing crime. I look forward to going into work every day knowing I could change someone’s life for the better.”

48-year-old PC Frances Block from Shoreham-by-Sea has joined the service after a varied career within sport and education. A sixth form sport teacher until 2012, Frances then had the opportunity to umpire the hockey at the London 2012 Olympic Games. After being a full-time parent she then went on to work at Gatwick Airport and at Glebe Primary School as a sports technician. Frances has also represented Sussex in cricket and has won the County Championships twice, collecting the trophies from the Duke of Edinburgh at Buckingham Palace.

Frances said: “I’ve wanted to be a Police Officer since I was 3 years old so it really is a dream come true and I cannot wait to start! I want to feel like I have contributed to society, to do my bit to help the local community and to make a positive impact.”

PC Dominic Chapman from Burgess Hill brings experience of business management to the role, having studied jewellery education, gemmology and watchmaking before establishing his own business. He is now taking on his latest challenge by joining Sussex Police.

Dominic says: “Having run a business of my own, and that of a colleague for a number of years, I was ready for a new direction. I had previously needed to call on police for help with incidents in my shop and was always very impressed with their response.  I also saw just how much they care when they supported me and my family when a relative died suddenly. I’m looking forward to being part of that team.”

23-year-old PC James Kirk from Eastbourne joins the force after working for four years within a local hospital.  He says, “Working in a hospital means I’ve been able to work alongside police officers, gaining an insight into their work and starting to build some good relationships with the local team.

“I feel extremely proud to become a police officer and my family are extremely proud of me. It’s been a long-term goal for some time and I’m looking forward to being proactive within communities to help solve issues for local people.”

Police and Crime Commissioner Katy Bourne said: “Joining new recruits and their families at police officer attestations is one of the highlights of the year for me. Despite all the challenges that policing will throw at them over the years to come it is truly heart-warming to see that people still want to make a difference. Swearing that oath brings unique responsibilities and powers to help their peers make Sussex safer for us all.

“On behalf of Sussex residents I warmly welcome all 72 new officers to the force and the rewarding career ahead of them.”

The force has opened for police officer recruitment once again and is currently inviting applications for the three-year PCDA, with successful applicants joining Sussex Police from June 2022. Recruitment closes on Monday 11th October.

The Police Constable Degree Apprenticeship is an entry route for non-graduates, allowing officers to work towards a degree in Professional Policing Practice. The entry route allows the officers to gain a thorough grounding in the skills and knowledge they need to meet the ever-evolving landscape of 21st Century crime.