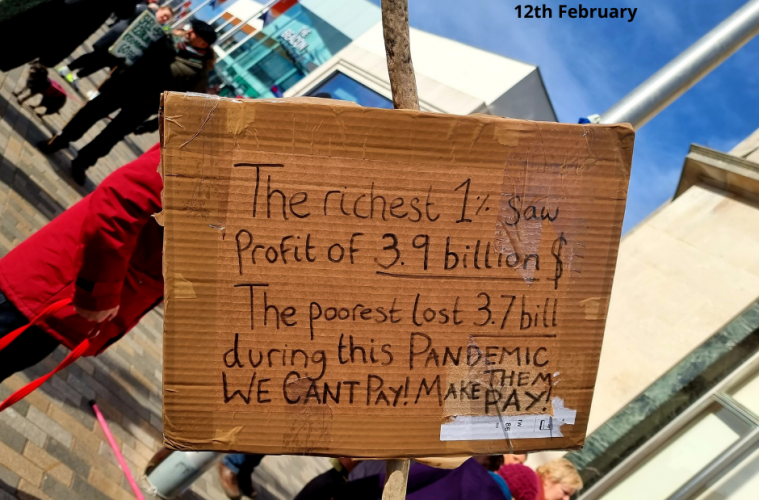 A "Frankly Absurd" and "Insulting" "Sick Joke" – do you agree?

A “Frankly Absurd” and “Insulting” “Sick Joke” – do you agree?

With soaring inflation set to continue for 2 years, The Bank of England Chief wants workers to show “restraint” in their pay demands. The underlying message goes like this:- I know it will be “painful”, but tough luck on you lot. This is how it works. You lot suffer, then suffer some more, and don’t ever expect otherwise. His remarks have been branded as a “sick joke” by GMB Gary Smith; and “frankly absurd” and “insulting” by the High Pay Centre think tank. Andrew Bailey is meant to be looking out for the country’s money. But whose money exactly you might ask? Certainly not the workers money. The big Bank Boss wants workers to bear the brunt of the Cost-of-Living Crisis by taking a real wage decrease. Yes. Let’s be totally clear about this. A pay restraint IS a pay decrease.

And all the while our carry-on Chancellors continue making measures to ensure the rich become ever more obscenely richer. Rishi Sunak clearly expounds the millionaires’ wealth-safeguarding myth that money will eventually trickle down to us lot. He must know this isn’t what happens. Remember, workers had 11 years of wage restraints under the austerity years. Their real wages took a massive hit whilst money was literally being created to bail out the Banks. Workers were expected to pay for the 2008 Banker’s created Economic Crisis. And many of us accepted this as the ‘sensible’ thing to do. We were led to believe in pseudo handbag economics as though a country’s budget runs like a household budget. George Osborne knew he was peddling a Tory Party donors’ elite serving wealth-safeguarding myth, and so does Sunak. Sunak’s not daft, though he is hoping we are. He recently ruled out a wealth tax on the profits busting energy companies in favour of a 54% hike on our bills. France set a 4% cap ensuring EDF takes the hit. Germany will be setting a 5% cap. But here in Britain, the ruling classes know that we’ve accepted undue hardship in the past, and they are banking on it that we will do so again. Banking on Business as Usual.

But the cracks are beginning to appear. Even the super-rich are getting concerned. Did you know that last October, a group of 30 UK millionaires sent an open letter to Chancellor Rishi Sunak asking him to introduce a wealth tax on the richest in society to cover the cost of the pandemic? And last month, from over 100 super-rich millionaires (headed for the Davos World Economic Forum), an open letter began circulating in which they declare how fully aware they are that they are not paying their fair share of tax. In this letter they call upon “The

A note of caution here. It is not out of the goodness of their hearts, that the wealthy elites are beginning to queue up to hand back some of their riches, but out of fear. They are afraid if people begin to wake up and become fully aware how rampantly and grotesquely unfair the exploitative global economic system truly is, then their empires would eventually become seriously threatened. Wouldn’t it be better to hand over a weensy bit of our trillions now, keep the masses subdued and avoid any unruliness?

And it IS trillions. During Covid the rich increased their wealth by $10.2 trillion. Oxfam reported the 10 richest billionaires doubled their wealth during the pandemic. And the more averaged sized billionaires became a mere 54% richer. A wealth tax is the very least that needs to be done. It would help to redress some of the imbalance, but be clear, this would only be tinkering around the edges. It would not address the more fundamental issue that we are labouring under a dangerously exploitative global economic system. In truth, we are suffering a Cost-of-Exploitation Crisis, presented as a Cost-of-Living Crisis. But this little matter is for another article.

Getting back to rising costs. With the RPI hitting 7.5% in December and set to continue, this means prices are expected to climb faster than pay, leading to the biggest squeeze on household finances in decades. Research from the Rail Workers Union RMT in January revealed that workers on the National Minimum Wage and the Real Living Wage are more than £1,000 worse off now than 12 months ago. A worker on the National Minimum Wage would need £1,252 more a year to prevent real terms pay cut while a worker on the Real Living Wage would need £1,395 more.

Workers deserve a decent standard of living. The Eastbourne bin drivers recently won their 19% pay claim. But remember, the Council bosses wanted them to settle for a supposedly “generous” 3%, claiming it was good enough for the nurses so ought to be good enough for bin workers. This divisive rhetoric set some locals declaring the bin strikers as “greedy”. It set some locals saying stuff like ‘I’m not getting a wage increase so why should they?’ But we need to be standing in solidarity with all workers’ pay claims. The 3% for nurses was an insult. And yes, asking workers to “restrain” themselves is an insult. The RMT

Rail Cleaners are now striking for a 15% increase. They need this. They deserve this. Haven’t workers suffered enough?

So please, take no notice of the likes of Andrew Bailey. Has he asked CEOs to cut back on their big buck bonuses? No. The nerve of the man. But then what’s new? Eastbourne People’s Assembly set up in 2015 to oppose the ideological austerity that has seen the wealth pay gap in Britain rise exponentially since 2010. That pay gap has only increased during Covid. You are welcome to join our Campaign. The Cost-of-Living Crisis is set to worsen. We need to understand there are other, fairer ways of cutting the cake. Real changes that benefit workers have only ever been granted when they have been fought for. Nothing is handed to us on a plate. It’s time for the fight back. We need to stand together in order that Business as Usual that benefits the rich is challenged.