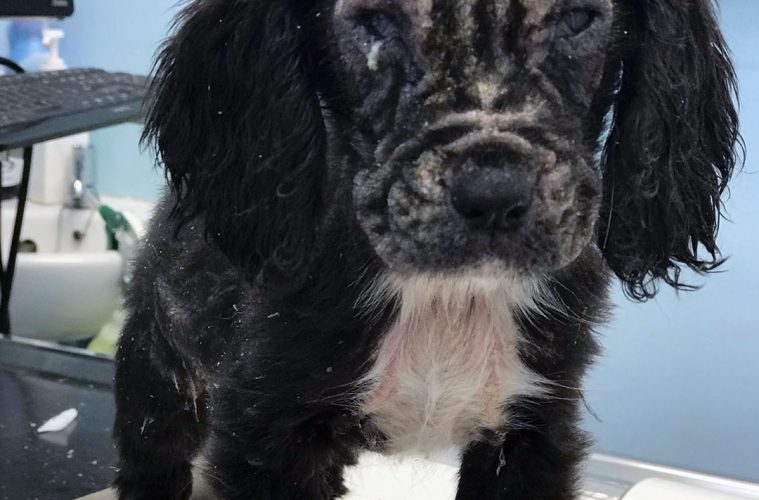 A RESCUE puppy who endured a ‘ruff’ start to life is now helping to catch criminals and protect the public in Surrey and Sussex.

The puppies were rescued by the RSPCA and found to be in extremely poor health. They were almost bald due to severe mange, had chronic eye and ear infections, and were extremely malnourished and underweight.

After weeks of treatment, the puppies – named Dustin, El, Lucas and Mike, after the Stranger Things characters – were rehomed to loving families. El, Lucas (now called Reggie) and Mike all settled in brilliantly but, unfortunately, poor Dustin struggled in his new home.

Jo Douglas from the charity’s Millbrook Animal Centre in Cobham, who helped to care for the puppies, said: “Dustin was always on the go and needed constant stimulation and he was just too much for his adopters so he came back to us. We kept him busy by hiding tennis balls around the centres and playing scent games with him. He absolutely loved it – and was really good at following his nose and finding them so we contacted the police to see if they’d be interested in taking him on as a new recruit!”

Dustin was subsequently gifted to the Surrey and Sussex Police Dog Unit.

He was paired with PC Steph Barrett, who renamed him Badger, and said she could not wait to give him a new lease of life.

“I was saddened to hear how Badger had been dumped on the side of the road, but thanks to the RSPCA, he’s been given a second chance,” she said.

“I could tell he was a bit high-spirited, but through a lot of love and training, he has regained trust in humans and become a real success story. He’s still very mischievous at times, but that’s all part of the challenge!”

PD Badger has been qualified for about six months and is trained to search for drugs, cash and weapons.

And PC Barrett said the 20-month-old has a real spring in his step when it’s time for work.

She added: “When he hears the radio go off he squeals with excitement and I don’t even have to ask him to get in the van. He’s a joy to work with.

“He’s hard not to love. He’s still got that mischievous side to him but he’s obsessed with work and he makes me smile all day.”

PD Badger has secured numerous finds on the job already, including a substantial quantity of cash and drugs, and a mobile phone, found hidden within the grounds of a church in Belgrave Road, Seaford, on 12 November.

A 30-year-old man of no fixed address, and two men from Seaford aged 20 and 21, were all arrested in connection with the incident and have been released under investigation, pending further enquiries.