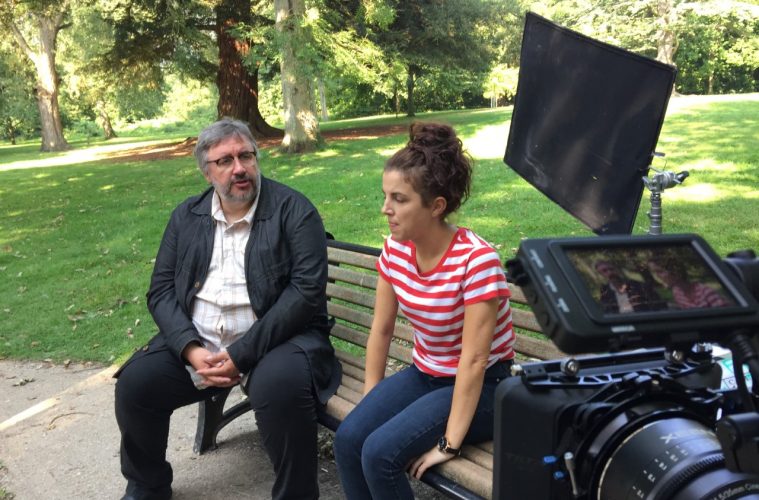 The picturesque town of Eastbourne is the backdrop to a new short film, ‘The Fruit Fix’, by Weavers Production.

The film stars Netflix ‘Derry Girls’ breakout star, Jamie Lee O’Donnell, as Hope, and Mark Benton as Doug, best known for his roles in ‘Shakespeare and Hathaway: Private Investigation’, ‘Doctor Who’ and ‘Early Doors’ (along with a certain building society advert!). ‘The Fruit Fix’ explores themes of social anxiety, and is a timely release during Stress Awareness Month, as stress is a significant factor in mental health problems, including anxiety and depression.

In the film, O’Donnell’s character, Hope, has a life changing piano audition coming up, which is nerve wracking at the best of times. Unfortunately, as a sufferer of social anxiety, it’s going to take extraordinary courage to seek the help needed to pursue her dream.

Help can come from a strange place. Can a banana and a piece of string really put her on the road to recovery? ‘The Fruit Fix’ is a nuanced look at a little talked about mental health issue, with a surprising story based on a real therapy, showing how anxiety can get in the way of someone living their best life.

Philip Connolly, Director and Writer of The Fruit Fix, says, “Not long after I first moved to London, I saw a person walking a banana on a piece of string. It certainly intrigued me at the time as I wasn’t sure if it was a “London Thing” or not. Like everyone else in the vicinity, I studiously ignored the “banana walker” and went on about my business.

“I forgot about the banana walking incident until several years later, I saw a documentary about social anxiety. I was surprised to discover the “Banana walk” was an actual treatment, I may have witnessed a person “walking a banana” because they were being treated for Social Anxiety

“The story resonated with me, partially because it solved a mystery and I’ve had my own anxiety battles. I wondered how terrifying it might be for a real social anxiety sufferer person to attempt the “banana walk” and risk ridicule. It’s like climbing a personal Everest, but doing it under radar. Someone is doing what is to them a hugely daunting task, overcoming huge fears, while those around are making a conscious effort to ignore it.

“I like that it’s a different form of bravery and unconventional personal heroism. The film is also very personal to me and reflects my own experiences of social anxiety. At times my own anxiety has been debilitating and I wanted to show the impact of that. I also gained help through cognitive behavioural therapy (CBT) which for me was life changing.”

Mark Benton and Jamie Lee O’Donnell were first choices for the characters of Doug and Hope. They both responded really well to the script and wanted to take on the roles, which was a huge confidence boost to Weavers Production. They were lucky to secure Mark for the shoot, as he was about to embark on a six-month shoot for ‘Shakespeare and Hathaway’. “It was tight,” Philip recalls. “We had just three weeks to prep and shoot the film before we lost Mark to another project. Somehow, we managed it, and in many ways the deadline was a positive thing, giving the production momentum and energy.”

Jamie Lee O’Donnell flew in from Derry (she’s an actual Derry Girl). Adnan Mustafa rounds out the cast as Ben from the record store. Prior to ‘The Fruit Fix’, Adnan can be seen in Idris Elba’s directorial debut film ‘Yardie’. Watch The Fruit Fix here: https://www.youtube.com/watch?v=QLYxpcTBhCk