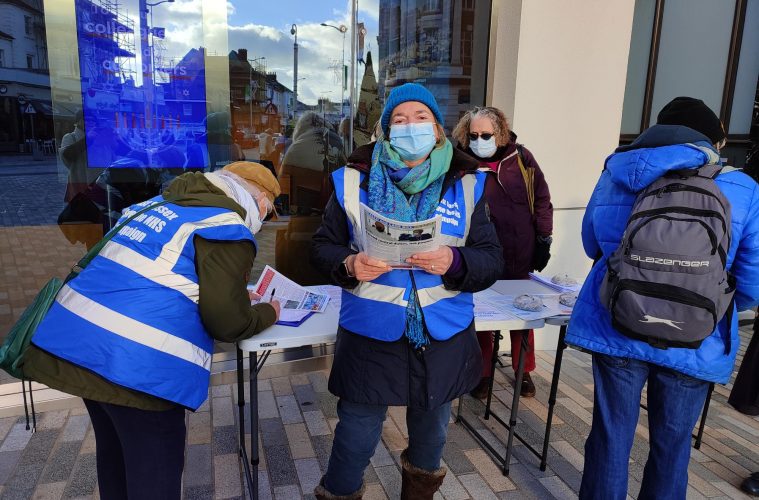 On Wednesday our campaign held a street stall in Terminus Road to urge the public to think about what is happening to our NHS. In the past many people would tell me that they didn’t mind if the NHS was privatised. But, now people are seeing the reality of it all there was a noticeable shift in mood. Our population may not know the details of various NHS policies, but they know they are being failed by this Government. One lady told me: “I have always paid my taxes and national insurance because I believed it would provide my family with good healthcare. I feel cheated now as I am watching my husband not get the care he needs from the NHS. This Government should stop throwing away our hard earned taxes on treats for their friends. I want what I paid for.”

The Health and Care Bill will push through a major shift towards privatisation. Eastbourne MP, Caroline Ansell, has voted in favour of this Bill on two occasions. I have repeatedly asked her to let me know if she believes this Bill will tackle the current crises in our NHS. But, she is yet to answer that question.

Bearing in mind she is a Conservative, who are ruthlessly pursuing their free market economic agenda, I fail to trust her claim that “the NHS is in my DNA”. It is this determination to reduce the public sector and hand power and financial support to the large corporations that is failing the NHS. As the private sector takes over running our NHS we will see wages cut, working conditions deteriorate, people denied care and a few getting very rich. Nobody who has the ‘NHS in their DNA’ could support a Bill which would do this.

As we were in the town centre, a press conference was held where the full report from the People’s Covid Inquiry was presented. This inquiry was held as people believed there was an urgent need to examine the UK response to the pandemic. Chaired by Michael Mansfield QC, and backed by the Keep Our NHS Public campaign, witness statements were heard over the course of nine sessions each lasting two hours. Watching these sessions was a chilling experience. We heard about gross negligence and utter failures of policy. Worst of all we heard about a deliberate effort to use the pandemic to push through further privatisation of the NHS. Enormous contracts were handed to mates of the Tories, who were largely unequipped to deliver the service they have been paid to deliver. The final report describes the Government response as ‘Misconduct in Public Office’.

How much more can this population take? People are losing their lives because of Government failings. Many people spoke to me about serious concerns regarding health, housing, education and the environment. Others spoke to me about the new draconian police Bill which could criminalise activities such as our street stall. If people are unhappy they owe it to themselves to protest and campaign for something better. Please get in touch if you believe you could help this campaign (lucette888@hotmail.co.uk).