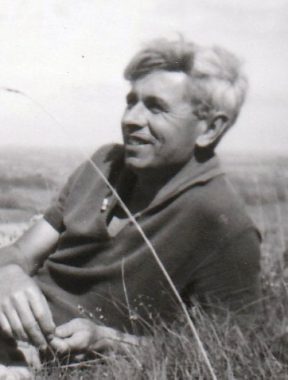 An artist in the spotlight

Stuart was born in 1926 and grew up in Dorset. After an abortive period as a medical student, he switched to art studying initially at the Beckenham School of Art under Carol Weight and subse-quently at Bournemouth Art School.

Here he graduated with an Art Teachers Diploma and took up a post at Wimborne Grammar School, Dorset and later at a special needs school in Yorkshire. In 1957 he took up a position in Bexhill Grammar school where he taught for the next 35 years. Here he became a most popular teacher, admired and respected by students and colleagues alike.

Throughout his long teaching career, he worked equally hard at his own work quickly developing a very strong and personal style that is instantly recognizable. This can be seen in equal measure in his painting and sculpture which he also produced until he retired. Artists that bridge both disci-plines in a convincing way are few and far between and Stuart was surely one of them. Although he did produce some oil paintings his chosen medium was gouache, an opaque water-based paint.

Stuart regarded himself primarily as a teacher and shielded away from any form of overt self-pro-motion and never attempted to extend his reputation beyond Sussex where he exhibited through-out his career and well into his retirement. He had one man shows at Michelham Priory in the 1960’s and in various galleries in Eastbourne and Brighton.

There is no doubt that, under different circumstances, Stuart’s talent and output would have gener-ated a far greater recognition, standing and significance but it is equally true that he would not have wanted to have lived any other way. Stuart died in 2017, aged 90.

newartgallery is preparing to have an exhibition of Stuart’s work.