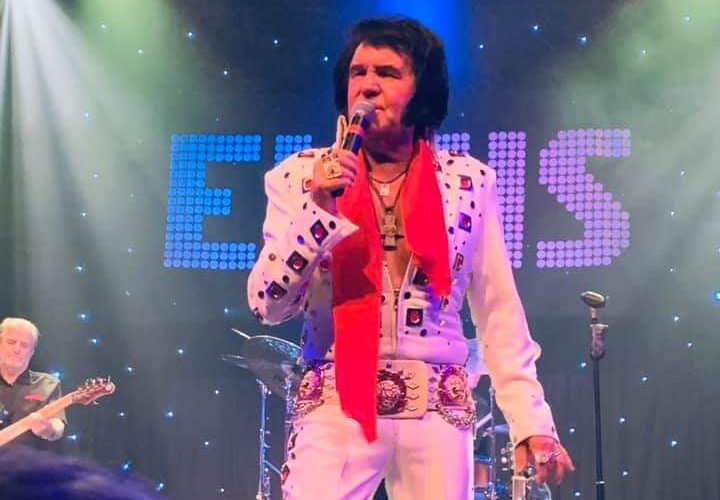 Local author Tony Flood. who earned the appreciation of thousands of Elvis Presley fans by carrying out extensive research on the King of Rock ‘n’ Roll and unearthing new facts about him in an explosive updated chapter in his celebrity book My Life With The Stars – Sizzling Secrets Spilled!, is now hailing the best Elvis tribute act.
Former Sky TV executive Tony, the chairman of Anderida Writers, reckons Neil Duncan is the “best Elvis tribute act I’ve seen” after watching him perform at the Langham Hotel, Eastbourne, where he also impersonated Tommy Cooper.
Tony says: “Neil (pictured here as Elvis) has a powerful, well controlled voice and great stage presence. Not surprisingly, he has won awards for his Elvis tribute act. And he will be returning to the Langham as Elvis later in the year.
“Meanwhile, Elvis fans are able to celebrate a host of anniversaries and events in January and February. Of, course, he was born on January 8th, 1935 in Tupelo, Mississippi and many years later, in 1968, Elvis’s wife Priscilla gave birth to their daughter Lisa Marie on February 1st in the Baptist Hospital in Memphis.
“In February 1960 the King of Rock ‘n’ Roll was promoted to sergeant in the army, and it was in February 1969 that he recorded Kentucky Rain. An earlier February landmark had come in 1956 when Elvis sang Heartbreak Hotel for the first time on national television, having released it in January that year, and it eventualy climbed to No.1 in the US.
Tony has highlighted these achievements, together with anecdotes and revelations, on Elvis websites and those sites featuring the golden age of movies. Thousands of website followers have responded, with many thanking him for sharing these memories.
Mr Flood, who is also the author of fantasy adventure Secret Potion and crime thriller Stitch Up – Killer or Victim?, reveals: “Following the excellent feedback I have received from Elvis fans and movie fans, I’ve updated the chapter about him in ‘My Life With The Stars’ – Sizzling Secrets Spilled.”
The book features a touching tribute to Elvis from Tom Jones, plus new sensational revelations about the highs and lows of Presley’s career and personal life, including his sad decline before his death in 1977.
Tony adds: “He starred in 31 films between 1956 and 1969. King Creole, Jailhouse Rock, and G.I. Blues were ideal showcases for his superb talent as a singer. This underlines why, more than 60 years later, Elvis is still regarded by many as THE GREATEST ever entertainer. But among the tributes, there are some allegations that tarnish his image.”
My Life With The Stars – Sizzling Secrets Spilled!, which is available on Amazon for just £1.99 as an e-version and £5.99 as a paperback, also comes up with revelations and anecdotes about a host of other showbiz and sports personalities from #Marilyn #Monroe and #Frank #Sinatra to #George #Best and #Muhammad #Ali – plus #Eric #Morecambe, #Joe #Pasquale and a host of comedy icons.
More details about Neil Duncan are available on www.elvisinthebuilding.com