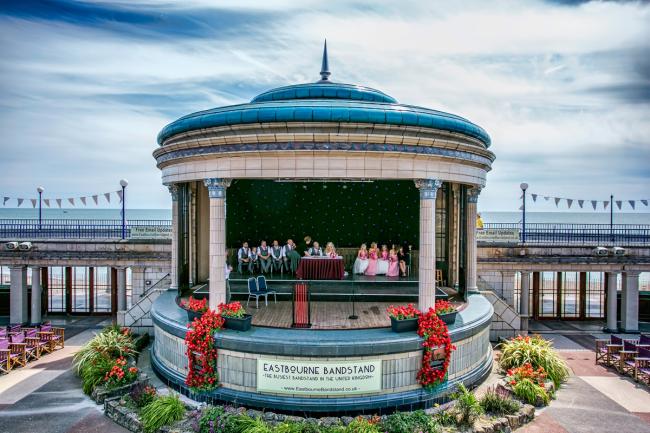 Caroline - 'there is great hope for Eastbourne Bandstand'

The future of Eastbourne’s iconic bandstand remains uncertain after a rescue plan was dismissed by councillors who met last night (Weds 23 Feb).

Conservative opposition leader, Cllr Robert Smart, proposed a budget increase for renovation of the crumbling bandstand and dilapidated promenade. His vision was to complete as much as possible this year while the bandstand remains closed due to its perilous state.

But the ruling Liberal Democrat members on the council voted against the scheme which would have seen an increase from £750,000 to the previous estimate of £3m on the project.

Cllr Smart said that he’d been encouraged by the council leader to propose such an amendment when he and bandstand campaigners spoke at a Cabinet meeting earlier this month. He asked for universal support to “show local democracy in a positive light” and be “a positive advert for local democracy and confirm that we are all working to take Eastbourne forward”.

“We were all shocked by the news of the closure of this iconic asset for this summer, just as we are all able to celebrate Freedom! We know how important this iconic and symbolic musical facility is to residents, and indeed to visitors who are attracted by it specifically. Staycations may be enhanced by the current international tensions”, Cllr Smart told last night’s meeting.

The Conservative leader called the bandstand’s closure a result of “neglect, incompetence and excuses”. He referred to procrastination which now looks set to continue given last night’s vote which has disappointed campaigners. He said he was disappointed that the town’s LibDem Cabinet “continued to put forward spurious excuses following years of neglect of the bandstand and other important assets.”