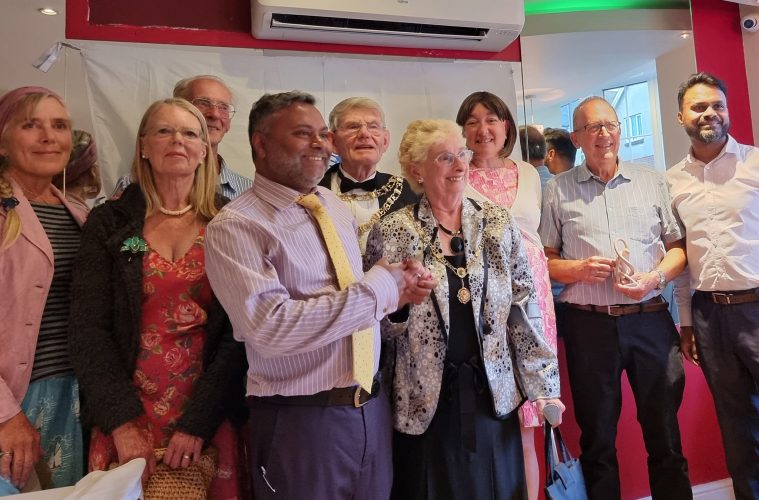 £1215 was raised for the victims of the climate related flooding in Bangladesh. The Fundraiser was hosted at The Spice Gardens on Tuesday 5th July.

Over 30 people attended the evening that was organised by Mozmil Hussain, Vice Chair of United Nations Association – Eastbourne. Mozmil had only recently returned from Bangladesh having spent a month planting over 2000 trees. He involved local people in the programme and talked on how important it is. These trees will hopefully assist in mitigating climate related crises in the most climate vulnerable delta nation in the world.

Certainly, Prime Minister Sheikh Hasina has very recently called upon citizens to join a nationwide campaign of tree plantation. She has urged everyone, to each plant at least three saplings of fruit, wood and herbal during the rainy season. Mozmil far exceeded that target of course.

The fundraiser evening heard from Ian Elgie (Chair UNA Eastbourne) who gave a very informative talk on why Bangladesh was so vulnerable to climate related disasters. From the north where the increased run off from the Assam rivers (due to warmer temperature); through to the south where the Mangroves are being destroyed thus taking away a natural defence from the sea.

Carol Mills from the Eastbourne Climate Coalition spoke about the importance of the richer nations to support those in the global south who are suffering the effects of the climate emergency. Unless radical climate action is taken now, 17% of Bangladesh would vanish under the sea by 2050. And currently climate refugees have no human rights and there isn’t even an agree definition of what a climate refugee is.

A huge thank you to local businesses who generously donated raffle prizes; Posh Nails, Janet Flowers and The Spice Gardens. And thank you also to Mayor Pat Rodohan and the Climate Coalition who also donated prizes. The mayor gave a heartfelt speech in support of the evening. A thank you also to Bournefree Magazine for a half page event promotion – a great support that we really needed as the event was called at very short notice due to the urgency of the disaster.