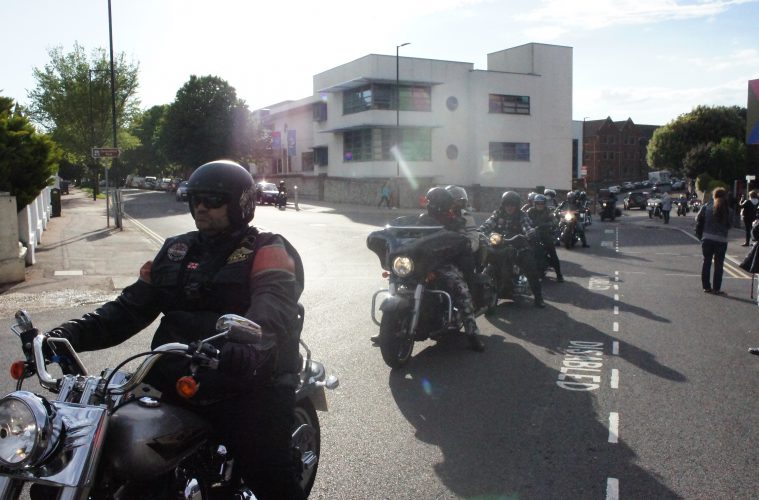 Eastbourne’s Congress Theatre was all revved up with the opening of the iconic Jim Steinman and Meat Loaf musical Bat Out of Hell, and it happened in style accompanied by the 1066 Chapter Harley Davidson group who supported the night making lots of noise with over 40 gleaming big American V twin bikes and trikes!

The two lead performers in the show Glenn Adamson (Strat) and Martha Kirby (Raven) came out to see the bikes ahead of taking to the stage that night to perform to over 1000 people who gave the show a roaring standing ovation.

45 huge bikes and trikes, all Harley Davidsons, roared around the venue prior to the opening night creating an incredible atmosphere, and perhaps a few curtains to twitch around the neighbourhood! The 1066 chapter has over 400 riders all over the South from across Sussex to East Surrey and West Kent, last night bikers from across the region descended en-masse to Eastbourne for the premiere of the Meat Loaf musical.

Goosebumps were created when all 45 bikes parked outside the venue and revved their engines – the roar was ecstatic and drew a huge crowd. The vibrations could be felt from yards away with a noise to truly celebrate the arrival of the West End touring show which comes to Eastbourne for the first time.

Chris Jordan, Eastbourne Theatres Theatre Director said: “What an amazing atmosphere for theatre-goers with the 1066 Chapter all coming out to show their support of this incredible musical. We’re in awe of the bikers who have travelled from all over the county to come and be a part of this event. Bat Out of Hell is the ultimate rock musical and the roar of all these engines is the perfect way to start the week here at Eastbourne!”

Richard Kent Director 1066 Chapter said: “The 1066 Chapter were delighted to be asked to be a part of the opening night celebrations for Bat Out of Hell and we’re delighted that with 45 bikers all making the effort to come down to Eastbourne we’ve smashed the previous record for bikes attending the opening night of the show. Previously it was Manchester with 30 bikes – well we beat that by 50%!”

The event was organised by Bat out of Hell with Harley Davidson groups across the UK who attend the opening night of the show, and with 45 bikers all revving outside the Congress it’s made Eastbourne the biggest event of the tour to date!

Bat out of Hell is at the Congress Theatre, Eastbourne now until Saturday 28 May to book see eastbournetheatres.co.uk or call 01323 412000.

If you want to find out more about The 1066 Chapter or are interested in Harley Davidson bikes visit Sykes Harley-Davidson, Holmes Hill, Lewes BN8 6JA or see www.1066chapter.com