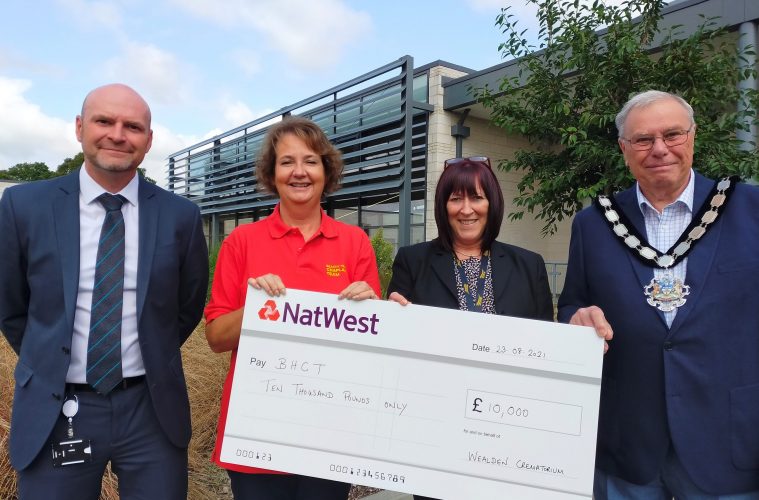 Chaplains working in crisis intervention have been presented with a £10,000 cheque from Wealden Crematorium.

The money was donated to the Beachy Head Chaplaincy Team after staff at Wealden crematorium in Horam nominated a local bereavement charity to receive a share of the funds – raised through the Institute of Cemetery and Crematorium Management’s recycling metal scheme.

The crematorium is part of the scheme and nominated BHCT, which carries out vital work with vulnerable people. Wealden District Council chairman Councillor Ron Reed, who presented the cheque to BHCT said,

“I would like to present this cheque on behalf of council and the Wealden Crematorium team to an extremely worthwhile charity.

“The Beachy Head Chaplaincy Team provides crisis intervention and support whilst working alongside local services. This is an extremely worthwhile charity that has saved many, many lives at Beachy Head and Birling Gap here in Wealden.”

Shaun Peters, crematorium and green spaces manager at Wealden District Council, said, “The recycling of metals following a cremation of a deceased person is being done with the written consent of each bereaved family.

“Following a cremation, the cremated remains may contain metals from orthopaedic implants such as hip or knee replacement joints as well as items from the construction of the coffin.

“The metals, always with the consent of the bereaved family are recycled by the ICCM with proceeds shared between its members to donate to a charity of their choice. All cheques are made payable to nominated charities and not the member crematorium. We chose the BHCT charity for the marvellous work it carries out in the local area.”

The Beachy Head Chaplaincy Team is a valued search and rescue charity that seeks to save lives at Beachy Head and also covers Birling Gap. Chaplains and volunteers patrol on foot and by car and respond to emergency calls locating anyone at risk.

Using skills in crisis intervention, the team members offer supportive listening to start a dialogue and to encourage more hopeful solutions than ending a life. The charity works alongside local services helping people to access support.