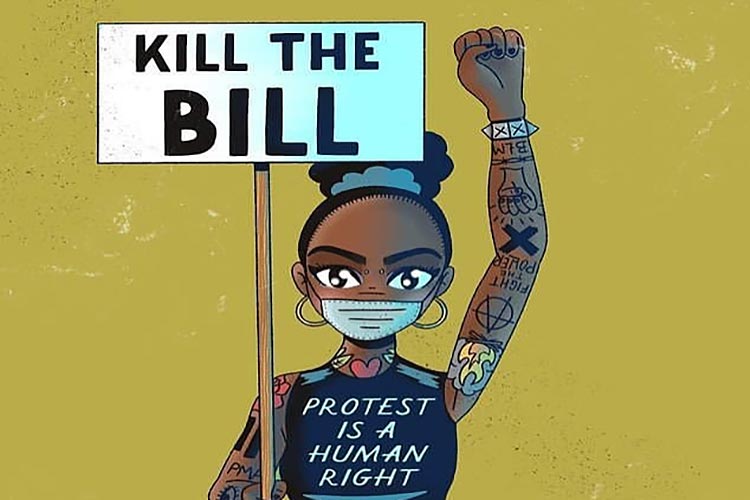 'Big' Eastbourne Kill the Bill protest on May 1st.

‘Big’ Eastbourne Kill the Bill protest on May 1st

IT looks like there will be an Eastbourne Kill the Bill protest on May 1st.

It’s being organised by Eastbourne Stand Up To Racism.

Here’s the group: “You are invited to attend this meeting to discuss a Kill the Bill/defend the right to protest/defend the Gypsy, Roma and Travelling communities event to be held on May 1st.

We want this to be as big an event as possible so please forward this invitation to as many people as possible.

The Bill threatens to criminalise protest organisers and those attending protests.

The government says the aim of the bill is to prevent disruptive non-violent direct action of the kind undertaken by Extinction Rebellion (and by organisations like Greenpeace) and to prevent protests such as that by Black Lives Matter in Bristol, by bringing in long prison sentences for those involved in such protests (up to 10 years).

That would be bad enough but the Bill goes further and also gives powers to the police to impose any restrictions they see fit on any protests, even one person protests (for instance to prevent anyone hearing you).

The Bill also includes severe sentences for non-compliance with any police restrictions. This also applies even if the police have failed to communicate restrictions to demonstration organisers.

Those attending protests could also find themselves in prison for even unintentionally risking causing serious nuisance. Disturbingly the Bill also gives power to the Home Secretary to introduce still more restrictive interpretations of these restrictions on protests via regulations – i.e. without full Parliamentary scrutiny.

The Bill also threatens to effectively criminalise the Gypsy, Roma and Travelling communities.Anyone who has attended a protest, march, rally, strike or picket line or who intends to over any issue be it climate change, racism, sexism, trans rights, low pay etc etc. has an interest in defeating this bill.

We will also look at sending an open letter to Caroline Ansell with as many signatories as possible. Please email eastbournestanduptoracism@gmail.com if you would like to see the draft before the meeting.”