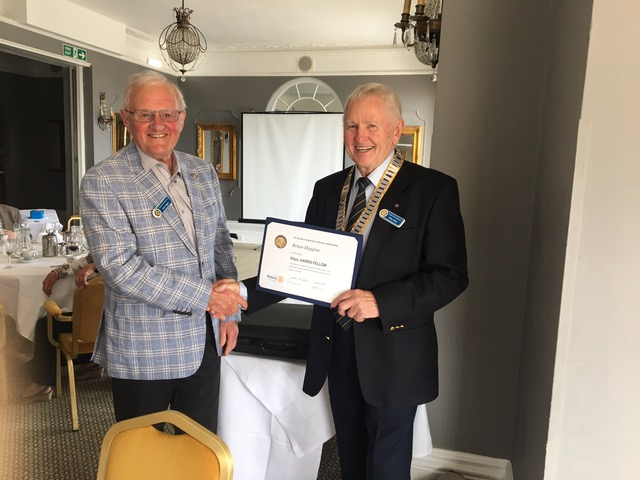 Eastbourne Rotarians bade a fond farewell to a hugely popular colleague who is shortly heading off to begin a new life Down Under.
Former club president Brian Higgins and his wife, Pam, are moving to Australia to be closer to family and begin a new chapter of their lives. Brian will continue his rotary membership by joining the club in Burnside, Adelaide, in the south of the country, which is home to the couple’s son, Rod, daughter-in-law Shirley and two grandchildren.
As well as his membership of rotary, Brian has been a true champion of the Eastbourne community and served as a magistrate for 36 years, including three as chair of the Sussex bench. He was a borough councillor for 16 years and also a governor of the former Sussex Downs College.
“We leave with mixed emotions”, said Brian. “Excitement at what lies ahead but sadness, too, for the friends and memories we are leaving behind.”
Brian’s pending departure was marked by a surprise lunch with fellow Rotarians, at which he was presented with the worldwide movement’s highest accolade, the Paul Harris Fellowship, along with honorary membership of the Eastbourne club. Brian (left) is pictured receiving his award from club president Brian O’Neil.