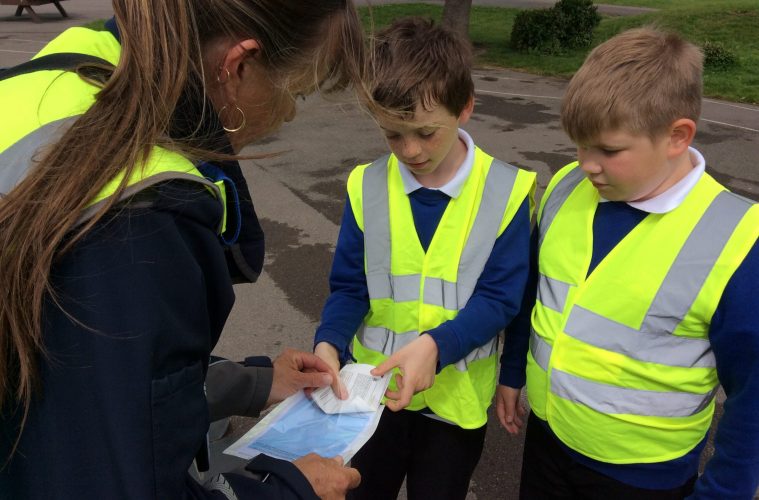 A CAMPAIGN to raise awareness of the importance of safe parking outside schools – including Shinewater – has been launched.

The Safe Space programme aims to promote the safe spaces outside schools and highlights why parents and carers should not park on zig zag ‘keep clear’ road markings or on double yellow lines.

Civil Enforcement Officers are holding workshops in a number of primary schools across the county to explain to pupils what the road markings outside their schools mean and why they are necessary.

The children are also taking part in activities including issuing penalty charge notices to trikes illegally parked in the playground and reporting their tickets via two-way radios.

Pupils taking part in the workshops are awarded a Safer Schools Champion sticker and certificate. Information is also being sent home to remind parents and carers why they must not park in a school’s safe space.

Cllr Claire Dowling, lead member for transport and environment said: “We know that the majority of drivers park responsibly outside schools, but unfortunately there is a minority who think it is acceptable to ignore the road markings and park where they like.

“As the children have been learning through our Safe Space workshops, ‘keep clear’ markings and double yellow lines are there to create a safe place outside our schools so children can see and be seen when they are crossing the road or waiting on the pavement.

“I urge parents and carers to remind themselves of the parking restrictions that apply outside schools. If you have to travel to school by car, please keep the safe spaces outside your child’s school clear.”

Since the start of the new school year in September through to early June Civil Enforcement Officers completed 572 schools watch visits, with the aim of educating parents and carers about where they can and cannot park.

During the visits, officers issued 154 Penalty Charge Notices and 958 vehicles that were in contravention of the parking restrictions were asked to move on.

Schools can find out more about the programme and request a visit from the Safe Space schools team by emailing parking.information@eastsussex.gov.uk.