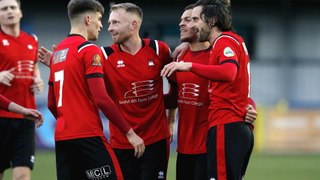 Eastbourne MP Caroline Ansell has offered support for Eastbourne Borough FC in the wake of the dramatic shutdown of the club’s National South season.

Club chairman Dave Blackmore wrote a detailed letter to Caroline last weekend, and he shared his concerns with the town’s MP in a 30-minute Zoom call on Tuesday morning, and he was happy afterwards to issue a positive report back.

“Caroline is fully supportive of our cause,” said Blackmore, “and she wanted me to pass on her thanks for the incredible work the club does in the community, and the positive impact we have, from the young ones at the nursery all the way through to our elderly residents and members.”

In common with all clubs in National South and National North, the Sports find themselves in a two-week shutdown, while the League and its member clubs come to terms with a possible withdrawal of financial support.

This season Borough have played – except for one single December fixture with Dartford – entirely behind closed doors. A three-month grant from October to December, to compensate for loss of gate income, was expected to be extended into the New Year, but the Government has indicated that future support will take the form of loans instead of grants.

“That news has been a hammer blow to us and all clubs at our level,” said CEO John Bonar last week. “In normal times, we would be just about making ends meet. To continue without grant support would frankly be reckless, and it might literally jeopardise our longer term survival as a football club.”

His colleague Dave Blackmore reached out to Caroline Ansell last weekend. “I want to thank Caroline very sincerely, for listening to us and giving me so much of her time. This of course is not a party political issue – it is about our town and our community. Eastbourne Borough is warp and weft with our local community – and the same is true of football clubs like us right across the country.

“She is planning to talk to as many MPs as she possibly can, to try and form a body of support, as well as directly contacting Nigel Huddlestone, Oliver Dowden and Tracey Crouch (Ministers and MPs with responsibility for, or involvement in, Culture, Media and Sport).

(Kevin Anderson adds) Borough’s reputation as “more than a football club” extends well beyond the town. In 2019, the Sports were proud to be voted National League Community Club of the Year. Rooted in Langney, they have literally grown up with that area of the town, since – over half a century ago in 1965 – Len Smith and a bunch of mates decided to turn their Under-16 boys team into a men’s parks side. And the rest is local history.

Now, under the wider umbrella of its CIC Trust, the club serves the community from the cradle to old age. The Priory Lane complex includes an Ofsted-acclaimed nursery as well as a huge indoor bowls hall, and – in Covid-free times – its Langney Sports Clubhouse hosts a range of social activities, including for elderly residents. And even in the current virtual shutdown, commercial manager Sian Ansell (no relation!) organised New Year food hampers for dozens of local residents in need.

On the footballing side, Borough’s first team competes in the second-highest tier of non-league, recently attracting national television coverage with a live FA Cup tie against Blackpool. Its youth section runs coaching and fixtures for well over 400 youngsters. The Academy, run in conjunction with education partners Bexhill College, offers students an integrated route to higher education.

The Sports have also championed disability football, including the pioneering Frame Football for children with limited mobility. And there is regular Walking Football – for older supporters who can keep up with Danny Bloor’s high-octane first-teamers in mind, but not quite in body!

Under the dark Covid-19 cloud, all this is at stake. Blackmore, his board, and the core of Borough volunteers face the challenge of keeping the club alive – without gate income or commercial activity and, now, with the possible withdrawal of the Government grant. Running on empty. It really is as stark as that.