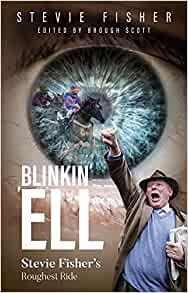 Chaseley Trust resident releases book about his 'Locked in Syndrome'

Chaseley Trust resident releases book about his ‘Locked in Syndrome’

CHASELEY Trust resident Stevie Fisher has released his own book Blinkin’ ‘ell that tells the story of his ‘roughest ride’.

“Since August 2014 former championship-winning farrier Stevie Fisher has been totally incapacitated with ‘Locked in Syndrome’ yet has never let self-pity block out the remembered fun. He wrote this book with an eye-gaze: 33,000 words blink by blink, letter by letter, to record the best and worst of an amazing life.”

Proceeds from the book will be shared between The Stevie Fisher Trust, The Injured Jockeys Fund and The Countryside Alliance.

You can purchase your copy here: http://ow.ly/MKoW50HkNFX