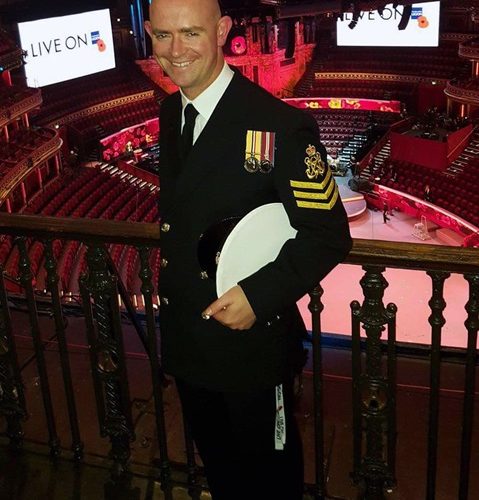 His efforts testing hundreds of sailors on HMS Queen Elizabeth and his frontline work in an NHS hospital emergency department saw him become an Associate of the Royal Red Cross.

The 36-year-old said: “I couldn’t believe it at first. It will be exciting when I can let people know, having to hold off since finding out has been tough. I cannot wait to tell them.”

Andrew, from Eastbourne, has played a pivotal role in the fight against coronavirus, first during his time on HMS Queen Elizabeth in April. With the aircraft carrier due to deploy for Fleet Operational Sea Training, he had to come up with a system to test all 800 of her sailors – a feat he repeated in September ahead of F-35 Lightning jets trials.

On his work on the carrier, his citation said: “It was largely due to CPONN Cooper’s experience, dedication and hard work that the ship had been able to go to sea safely with the confidence they could deal with all eventualities.”

Away from HMS Queen Elizabeth, Andrew showed his expertise and leadership in the emergency department of Queen Alexandra Hospital, in Portsmouth, leading his NHS and military colleagues in the midst of the Covid pandemic.

Using his military background, he helped set up additional resuscitation rooms at short notice and helped give extra training to junior staff in assisted intubation and the use of non-invasive ventilation – medical care often required for coronavirus patients.

He also helped colleagues on working in full personal protective equipment (PPE) and led the re-design of the hospital’s emergency department.
The senior rating said: “It is quite unique that I was able to use my skills both on a carrier like Queen Elizabeth and on the frontline of the NHS. But I couldn’t have done it by myself. None of it would have happened if it wasn’t for the whole team.”

Andrew joined the Royal Navy as an aircraft handler in 2004. He trained to be a nurse from 2008 and has served in hospitals around the UK as well as on HMS Queen Elizabeth during her Westlant 19 deployment.