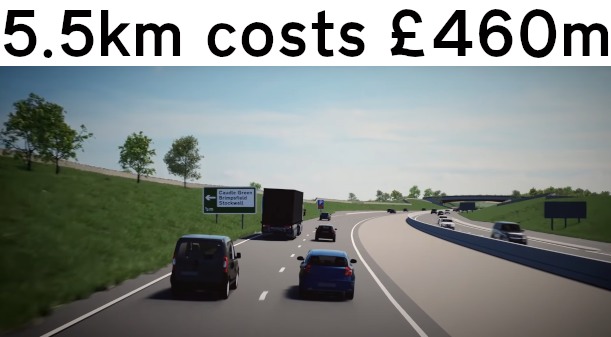 THE likely cost of a new dual carriageway between Lewes and Polegate has soared past the £1bn mark.

So says SCATE East Sussex – Campaigning for sustainable transport and against a new £1bn+ dual carriageway between Lewes and Polegate.

This is what it now says: “Previous ‘value for money’ calculations had assumed a price of around of £590m for 16km of new road. But National Highways’ most recent contract signed this week – for 5.5km of dual carriageway to complete the ‘missing link’ of the A417 between Gloucester and Swindon – has come in at £460m.”

Bill Rogers, chairman of SCATE East Sussex, says “By our calculations, this pushes a new A27 to £1.345bn – the project is at least as complex and sensitive. We said back in 2020, it would cost over £1bn – now we have real world data to back our estimate”.

“It makes a nonsense of the Highways business case. Do we really want to spend taxpayers’ money so that developers can infill greenfield sites across Wealden with posh new commuter houses we don’t really need ?”

“There’s still time for the Department of Transport to save some of the £6m being spent on road consultants trying to stand up this. It might, at least, be used for much-needed bus and rail improvements in our area”.