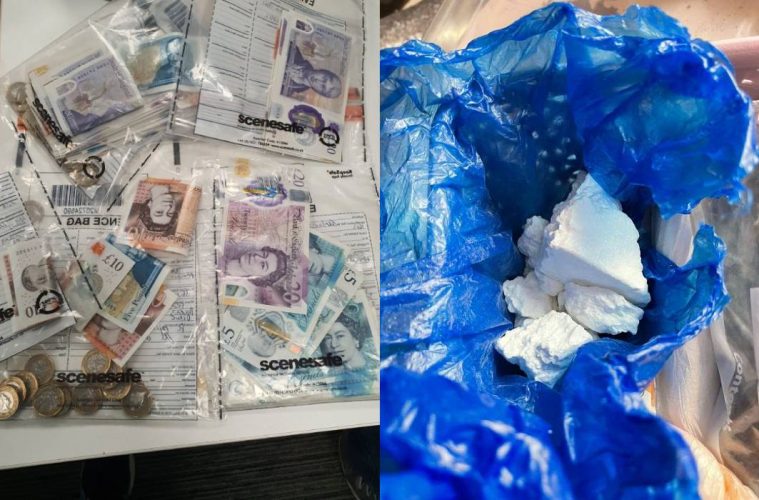 Police across Sussex have been keeping up pressure on ‘County Lines’ and other drug dealers.

During 2021 Sussex Police recorded 206 disruptions against phone ‘lines’ into the county, mainly from London, an increase of from 172 over the previous year. Over the past 12 months alone 184 lines have been disrupted.

And in March this work has been intensified as part of the continuing national effort.

Detective Chief Inspector Will Rolls said; “County Line drug dealing continues to be a threat with currently 42 county lines active across Sussex. The force’s primary concern remains the exploitation and trafficking of vulnerable adults and children and we continue to put dealers under increasing pressure. The number of ‘deal lines’, the dedicated mobile phone line to take orders from drug users, in operation in Sussex at any one time, often overlaps with adjacent force areas and fluctuates on a regular basis.

In March a week of national intensified activity focused on disrupting the activities of those involved in County Lines by safeguarding and protecting vulnerable people, pursuing offenders, reducing the number of lines, and seizing proceeds of crime.

Activity during the week of 7-14 March took place across the force area.

Other activity included:
– Proactive targeting of drug dealing activity, resulting in the execution of four warrants, 30 arrests for suspected Class A drug dealing and money laundering, seizure of drugs with an estimated street value of more than £125,000, and more than £20,000 cash:
– Seizure of 50 computers and mobile phones suspected of being used in drug dealing:
– Checks on vulnerable people at addresses across the county, resulting in identification of and support for 38 people vulnerable to ‘cuckooing’ by predatory drug dealers:
– Educational visits and discussions at hotels and B&B’s, to talk about how to spot exploitation and report it:
– Awareness sessions at 21 schools and colleges in liaison with partners, involving more than 2000 young people:
– Discussions with 100 taxi drivers, on ways to spot drug dealers and any signs of victim exploitation and how to safely report them to the police
-Working with BTP at Brighton Railway Station deploying the electronic knife detection arch, resulting in seizure of a ‘zombie’ knife:

In East Sussex, police activity resulted in seizures including (above left) £1000 cash seized in a raid on a flat and cocaine seized in a separate raid in a address, both in St Leonards.

In Brighton & Hove officers made arrests every day. These photos show (left) heroin seized when officers stopped a car, and (right) drugs seized at an address in Ditchling Rise.

During the past two years co-ordinated police activity againt dealers has increased, with a Surrey and Sussex Police intelligence team known as Operation Centurion, which works with London’s Metropolitan Police to target and prosecute offenders of County Lines activity between the capital, Surrey and Sussex. In the 18 months since the team’s inception, they have contributed to more than 140 lines being disrupted, and to arrests of more than 260 individuals across both counties.

The work of Centurion’s specialist teams includes analysis from mobile phones used by dealers to buy and sell class-A drugs. This information is critical to investigators, helping them target the most significant members of organised crime groups and ensuring longer term disruption.

Will Rolls said; “These excellent results are just a snapshot of our relentless seven-day-a-week work, even during recent lockdowns, which continu every day to disrupt dealers who try to deal dangerous drugs across our communities and we target those who use children to sell drugs or those who buy drugs from children. We investigate and prosecute, working relentlessly and targeting those who would bring harm to local people, including often the most vulnerable.

Will Rolls adds; “Local crime is often a direct result of major drug distribution via county lines and by working together with partners to shed a light on this often hidden crime. We are sending a clear message to drug dealers that they cannot expect to go undetected in Sussex.

But the response to County Lines isn’t just a policing one. Effective collaboration between law enforcement and safeguarding organisations and also the private sector industries is a vital part of both the national and local response.

Will Rolls said; “We also work closely with other agencies to support those vulnerable adults and children who are exploited by county line gangs. This includes regular visits to those adults at risk of cuckooing and raising awareness with those agencies engaged with children to ensure that information is shared effectively to prevent young people being drawn in to this criminality.”

Members of the public can also help, the best advice is to trust your instincts – if somebody shows signs of mistreatment, or a child seems to be travelling long distances or is unfamiliar with a locality, you can report suspicions to local police on 101 or online or to British Transport Police on 0800 40 50 40 if you see something on the railway network.

There are also many sources of further advice and assistance to help combat the harm caused by drugs. Safe Space Sussex – takes you to all the local organisations who provide support for those affected by drugs misuse.

‘County Lines’ is a term used by Police and partner agencies to refer to drug networks, both gangs and organised crime groups, from large urban areas such as London, who use children and young people and vulnerable adults to carry out illegal activity on their behalf. Gangs dealing drugs is not a new issue but the extent to which criminal exploitation of children and vulnerable adults, as well as the increasing use of violence, has become an inherent part of it through ‘County Lines’ makes it especially damaging.

The organised crime groups tend to use a local property, generally belonging to a vulnerable person, sometimes a drug user, as a base for their activities. This is known as ‘cuckooing’ and will often happen by force or coercion. In some instances victims have left their homes in fear of violence. Much police work involves identifying these victims and helping them.

Police continue to see children being exploited by criminal gangs to supply drugs in Sussex. Children have travelled from London to Sussex to deal drugs on behalf of county line gangs as well as Sussex children being exploited and targeted by London gangs to deal drugs locally. Our priority is to identify those children at risk of criminal exploitation and once identified work with partner agencies to put the appropriate safeguarding measures in place. “

The areas in Sussex most effected by the drug trade from London are the larger coastal towns, with established drugs markets that can be exploited locally, including Hastings, Eastbourne, Worthing, Bognor, and Brighton, but also towns such as Crawley,