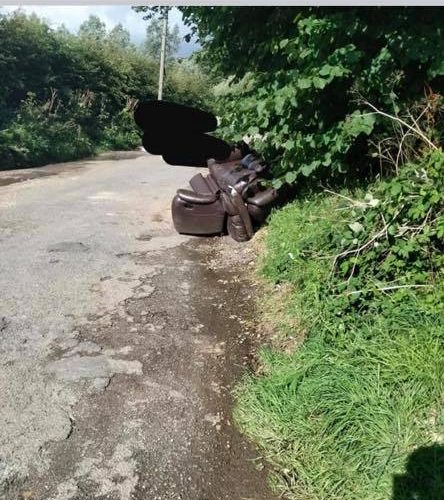 “On Sunday there was reports of a black bag which looked like remains of a dog inside, on a layby off the A267 in Hellingly.

Next to the dog was a dumped sofa. For now we have named this dog Nirvana meaning: a transcendent state in which there is no suffering)

The police were called and attended briefly but this was to only inform the council to dispose of it.. This could not be allowed to happen as someone somewhere is probably wondering what has happened to their dog, the dog needed to be checked for a microchip!

A lovely lady from Highcroft Vets picked up the dog to take back to the clinic.

On collection we found the dog has started to decompose and is just bones now. Unfortunately No microchip was detectable and at this point its impossible to determine the breed or sex.

We just know its a large breed dog. Some evil person has removed the head and inside the bag is a rope.

This only leaves our imagination to assume the worst.

RSPCA are involved but I don’t hold up much hope we will get answers, or they will examine the body.

It is vital that we find out who committed this horrendous act of cruelty. Someone is walking around harming dogs like this and is getting away with it. It could be another dog or a child next time.

Action needs to be taken now before its too late.”