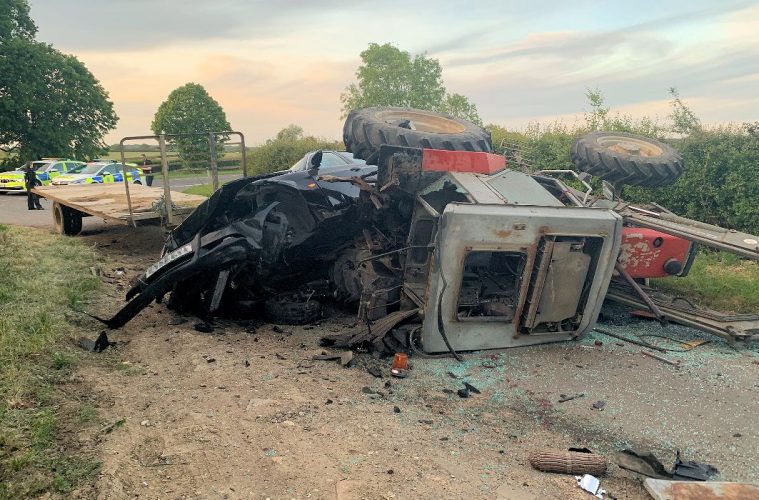 A drug-driver who caused this horrific crash – after driving at 120mph and racing with another vehicle – has been jailed.

The tractor had been turning left into Half Mile Drove when the collision occurred, and the impact caused it to overturn. Its driver – a 41-year-old man from Hailsham – suffered serious facial injuries and temporary sight loss. He was taken to hospital and later discharged.

The BMW driver was identified as Harry Dennis, 21, of Maple Close, Maresfield. He also sustained serious injuries and was taken to hospital. His front seat passenger – a 22-year-old local man – did not require hospital treatment.

A blood sample was taken, which showed Dennis had at least 3mcg of cannabis per litre of blood in his system. The legal limit is 2mcg.

Investigations revealed he had overtaken a Honda Civic and reached speeds of 120mph – double the national speed limit of 60mph on that stretch of road – before he crashed into the tractor.

He was subsequently summonsed to court to face charges of causing serious injury by dangerous driving, and driving under the influence of drugs.

The Honda driver – who left the scene prior to the arrival of emergency services – was identified as Danny Stiller, 22, of St. Marks Field, Hadlow Down. He was also summonsed to court to face charges of dangerous driving, causing serious injury by dangerous driving and perverting the course of justice.

In police interview, Dennis admitted being at fault and said he was too inexperienced to drive the BMW which he had purchased only the day before.

He apologised for his actions and denied racing the Honda, but CCTV and witness statements obtained during the investigation proved both vehicles were travelling at speed and in convoy with one another moments before the crash.

Stiller had called 999 and stated he witnessed the collision, but later provided a signed witness statement to police stating he did not see what happened.

Dennis pleaded guilty to both offences, and at Lewes Crown Court on 20 April he was sentenced to 16 months’ imprisonment. He was also disqualified from driving for two years and eight months.

Stiller pleaded guilty to dangerous driving and was sentenced to four months’ imprisonment – suspended for 18 months – and disqualified from driving for 12 months. He is also required to carry out 80 hours of unpaid work and is subject to an electronic tag for three months.

He was found not guilty of causing serious injury by dangerous driving, and the offence of perverting the course of justice is to lie on file.

Investigating officer, PC Tom Van Der Wee, of the Sussex Roads Policing Unit, who attended the scene, said: “Although the defendants pleaded guilty and received credit for this, neither were willing to provide an honest account or take responsibility for their actions. Stiller denied that he or Dennis were driving dangerously and denied seeing the crash – despite us having a recording of the 999 call he made to the ambulance service where he admitted to seeing the whole thing.

“Dennis blamed the crash on a momentary lapse of concentration and said he was travelling at just over the speed limit. We were able to prove that he was deliberately driving at speeds far, far in excess of the speed limit – up to 120mph – just before losing control and crashing into the victim who was a tractor driver simply going about his business.

“Although the tractor driver sustained significant injuries, the outcome could have been much worse for both him, the occupants of the racing vehicles and indeed other completely innocent members of the public. Both defendants can count themselves lucky they didn’t kill themselves or anyone else with their selfish and mindless actions.

“I am pleased the court has recognised the severity of what they did and didn’t do, and now both defendants have the chance to do some serious growing up before getting behind the wheel of a car again.

“I’d like to take this opportunity to express my sincere thanks and gratitude to the members of public who came forward following our witness appeal, and the expert witness who determined the speed of the vehicles from the CCTV footage. As a result, we were able to piece together a jigsaw of the defendants’ driving leading up to the collision, which has helped secure their convictions and take them both off the roads.”