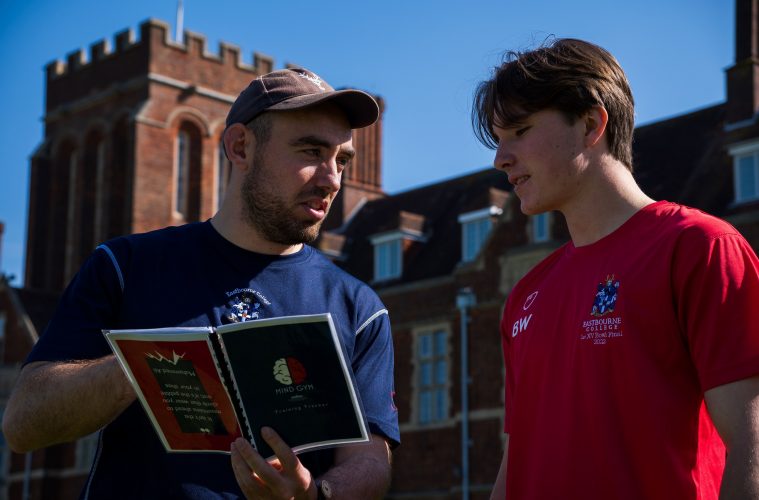 This Mental Health Awareness Week, Eastbourne College is celebrating the power of its Mind Gym – a unique initiative set up to boost overall pupil wellbeing following the pandemic.

The idea of the Mind Gym is to create a space where pupils can talk about their mental health, using sport as a vehicle to normalise these conversations and develop essential mental skills.

Pupils visit the Mind Gym to discuss problems they’re experiencing in their sport, but what they learn goes far beyond helping them on the court or field. Each pupil gets a Mind Gym training tracker and Jack takes a holistic approach to helping students overcome issues affecting their game, such as stress, anxiety, low confidence or negative thoughts.

“We’re not play-acting as therapists during the sessions, but encouraging holistic self-review, using sport as an access point. We’re developing the mental skills pupils need to improve at their sport by taking a deeper dive into what mental barriers could be impacting on their game.

“Each session is tailored to the individual and we use a range of tactics, such as creating new routine plans, doing scenario work and going through our mental skills toolbox.

“Our physical and mental health are closely linked, so we need to look after both in order to be at our best.”

Since Jack launched the Mind Gym programme at the start of the academic year, uptake has increased considerably with more than 30 pupils across year groups, from Year 10 up to Year 13, joining the drop-in sessions.

Jack also hopes the Mind Gym will help prevent teenage girls from disengaging with sport. A study by Women in Sport earlier this year found that more than one million girls across the UK lose interest in sport as teenagers, often due to fears about being judged and a lack of confidence.

Jack said: “Mental fatigue in sport does happen in teenagers, and you see a significant drop-off in girls when they reach their early to mid-teens, so we’re also trying to combat this.

“I’m a firm believer that in the next ten years the emphasis in sport will be around mental skills. We know that happy people make happy players – and young people have many pressures on them, from exams to social media.

“I don’t think other schools are doing anything like this yet – it’s closer to what you might expect at an elite academy for training athletes.

“The pupils are the biggest advocates. Many have said the Mind Gym has transformed their mindset and boosted their confidence not only in their sport, but also in the classroom and other areas of their life.”

One pupil, Aditya in Year 12, said: “I’ve found the Mind Gym extremely helpful – with a lot of the sports I play, mentality is so important – especially cricket. I want to be a professional cricketer.

“I used to criticise myself a lot but I have felt the change happening already – I’m a much more positive person now.

“I used to read into everything way too much, which made me irrational. I cared more about what others thought. I think that’s a common mistake kids make.”

Another pupil, Megan in Year 12, said: “We do practical sessions with a lot of scenario work and verbal sessions where we look a lot at negative self-talk, as I struggle with this, and how to cope with pressure.

“If all schools had a Mind Gym, it would change a big part of the way people think. It certainly has for me – I’m so much more positive. It would be really helpful for people.”

Eastbourne College is one of the UK’s leading co-educational boarding and day schools and can count Eddie Izzard among its alumni.

The school is known for its healthy approach to learning, prioritising the individual over the institution – the school’s motto is ‘Ex Oriente Salus’, meaning ‘safety’ or ‘health from the east’. For more information, visit www.eastbourne-college.co.uk.