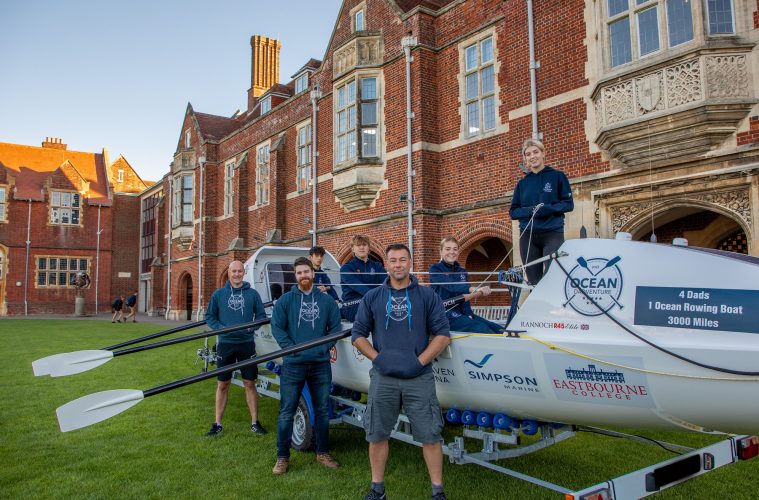 Pupils at Eastbourne College were inspired by four determined Sussex fathers who are attempting to row across the Atlantic Ocean in just 40 days – and will get the chance to have a go in their top-of-the-range ocean rowing boat.

The school is sponsoring the Ocean Dadventure crew, which includes skipper Matt Garman and rowers Steve Woolley, James Reid and Neil Furminger, who are taking on the Talisker Whisky Atlantic Challenge – known as the world’s toughest row.

Matt, Steve, James and Neil will row 24 hours a day in a brutal shift pattern from La Gomera in the Canary Islands to Antigua in 2022 to raise money for the Wolo Foundation, which helps Sussex families living with a cancer diagnosis, and Prostate Cancer UK.

Eastbourne College boys and girls gathered on Wednesday to show their support for the crew, who visited the school with their 28ft Rannoch R45 Elite rowing boat, which is designed specially to be the fastest four-man rowing boat on the seas.

Rowing is one of many co-curricular activities which pupils can take part in at Eastbourne College, and during the day the school held its own Atlantic Challenge – with the opportunity to go out in the Ocean Dadventure crew’s rowing boat as the prize for winning teams. Ten rowing machines were set up in the school sports hall, with rowing teams from each of the school’s houses competing to clock the most miles in an eight-hour challenge.

Of the girls’ houses, the Nugent team was triumphant with 84,712km rowed, while on the boys’ side the Gonville house was the winning team, with 96,578km achieved.

Skipper Matt Garman along with rowers James Reid and Neil Furminger also gave a talk to pupils in Years 10, 11 and 12 about the rowing challenge, and was joined by the school’s Head of Co-Curricular, Anthony Lamb MBE.

Anthony said: “The challenge ahead for the crew requires the same attributes and values we aim to instil in pupils at Eastbourne College: participation, perseverance, developing mental resilience, the importance of teamwork and helping each other to overcome adversity.

“That’s not to mention physical health and strength, which we aim to help pupils build within an active environment at the school – with plenty of watersports on offer.”

Headmaster Tom Lawson said: “Eastbourne College has a long history of success in rowing and we are proud to be sponsoring the Ocean Dadventure crew on their incredible journey.

“It was wonderful to see pupils’ enthusiasm to take part in our own rowing competition and to hear about the crew’s motivations behind the challenge.

“Determined, generous and incredibly hard-working – the team is a true inspiration to our pupils. We wish them the best of luck.”