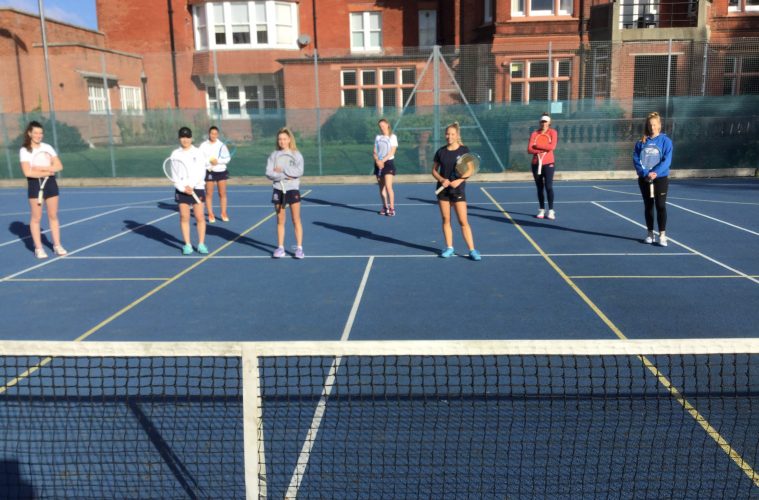 Although it is still early days, the College hopes that PET will begin to introduce talented tennis players to the College, who will subsequently benefit from world-class coaching, and then access pathways to successful USA university tennis entry.

PET is an East London based charity which provides tennis opportunities to a diverse range of players who might not otherwise have the opportunity to experience high level coaching and tournament play.

Their aim is to fund British tennis players from all ethnicities and backgrounds using their Tennis Aid programme.

PET’s mantra (AVAILABILITY | INCLUSION | DIVERSITY) has been welcomed by the College’s Head of Tennis, Simon Gent, who was delighted to link them with long-serving US university recruitment partner Stars and Stripes for this UTR event.

The Sunday collaboration comprised Eastbourne College’s top six players from the girls squad and two sisters who flew in from Stirling in Scotland.

All players played two full matches with results counting towards their UTR ranking.

Bathed in South Coast sunshine, with the South Downs backdrop to the north and the iconic College Memorial Building to the south, the standard of play was very high with all players acquitting themselves well.

The previous day, 11 members of the Eastbourne College tennis squad (five boys and six girls) had travelled to Sussex University in Brighton to compete in another UTR matchplay event fielding 24 boys and girls from across the south east.

All players had 3 matches.

Again the standard of play was high and all players did very well.

Huge thanks to Pippa Lane from Stars and Stripes Tennis Recruitment, and Hassan Soyer from Performance Ethnic Tennis for their support and insight this year.