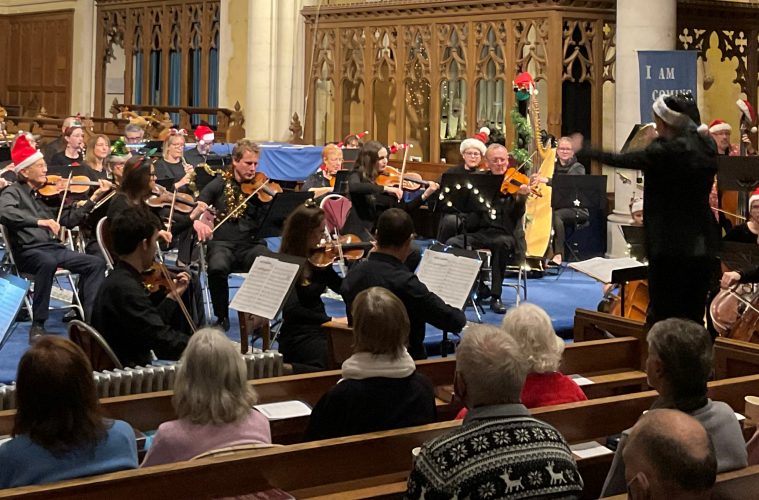 With Covid security in mind, audience carol singing was replaced by orchestral pieces containing traditional carols and 20th century Christmas songs.  Carols were featured in medleys by Vaughan Williams (the Sussex carol and O Little Town of Bethlehem) and Leroy Anderson (Good King Wenceslas, Silent Night, Hark! The Herald Angels Sing and O Come All Ye Faithful) and an overture based on carols coloured with overtones of Wagner.

The orchestra was dressed in traditional, sober black for the first half, which contained the more serious music: the Vaughan Williams medley, the Perpetuum Mobile by Johann Strauss the Younger and a suite of music from Swan Lake by Tchaikovsky.

The music after the interval was more secular and more popular in style.  It featured the evergreen Gold and Silver Waltz by Franz Lehar, the celebrated Austrian operetta composer, a selection from Me and My Gal (a reminiscence of the 1930s) and a spell of Americana in “The Most Wonderful Time of the Year” and “White Christmas”.  The players decorated their attire correspondingly with tinsel, Christmas hats and reindeer horns; two brass players even wore suits of fabric like Christmas wrapping paper.

All sections of the orchestra had solos in the Perpetuum Mobile, including the timpani, after the woodwind players had demonstrated their facility.  In Swan Lake the oboe solos made their well-calculated plaintive effect and the Pas de Deux was introduced the harpist’s luxurious arabesques.  The string section sustained both the lyrical melody and accompaniment in the Gold and Silver Waltz.  There were attractive trumpet solos in The Most Wonderful Time of the Year and Irving Berlin’s White Christmas and the brass section made a jazzy contribution in Leroy Anderson’s Sleigh Ride with a comical touch at the end.

The orchestra had been well prepared by its conductor, Simon Gower, who directed proceedings with his usual good humour and elan.

A Christmas Overture by Samuel Coleridge-Taylor

Medley: The Most Wonderful Christmas

Selection from Me and My Gal by Noel Gay

A Christmas Festival by Leroy Anderson