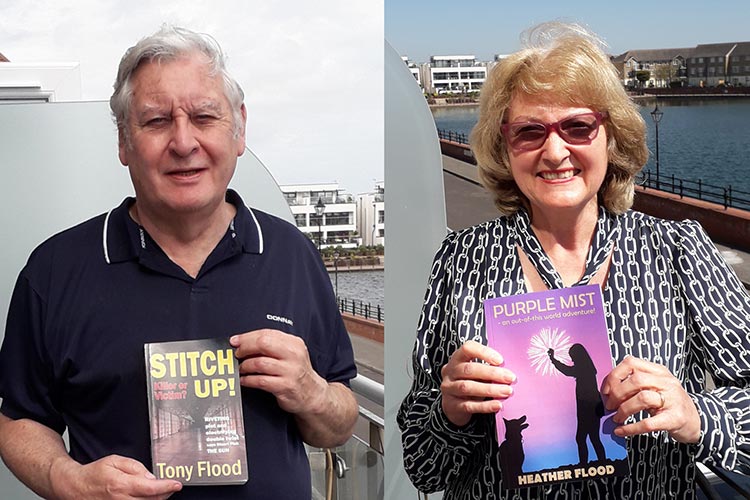 Their latest are Tony’s crime thriller Stitch Up! – Killer or Victim?, which The Sun newspaper’s Stuart Pink says has a “riveting plot and electrifying double twist”, and Heather’s fantasy adventure Purple Mist – an out-of-this-world adventure!, acclaimed by TV actors and other authors.

The secret of Tony and Heather’s success is coming up with new ideas and doing extensive research, during which Tony has discovered that most TV murder mysteries get things hopelessly wrong.

Former Sky TV executive and Fleet Street journalist Tony says: “I spent an enormous amount of time picking the brain of a former Met. Police officer to ensure the police procedures are correct in Stitch Up!

“I discovered that crime thrillers we see in films and on TV, such as Midsummer Murders, often fail to follow correct police procedures. For example, once a police officer believes someone they are questioning is a suspect they should arrest him or her before asking further questions. But they rarely even give a caution.”

Mr Flood, whose much acclaimed Stitch Up! asks if an Eastbourne man is a double killer or cursed with bad luck after his two former girlfriends are murdered, adds: “Another example concerns court cases. A witness should not be asked “do you see this person in court?” unless the witness has previously identified the defendant in a line-up, photomontage or mug-book search.”

Tony reveals: “I also discussed police procedures with a high ranking police officer when I was writing my previous crime thriller Triple Tease, and he also found fault with most TV thrillers. He thought the murder mystery series coming closest to getting procedures right was Scott and Bailey, featuring Suranne Jones and Lesley Sharp as two female detectives.”

Heather says: “I love TV dramas and fantasy adventures, but some of the storylines are too far fetched. It’s amazing how much havoc and damage is often caused when a villain is pursued. Car chases are a prime example. Viewers are often asked to put credibility to one side.”

Another secret of Tony and Heather’s success is their great characters. He says: “Readers loved the original characters in my first crime thriller Triple Tease in which the glamorous Katrina helped under-pressure DCI Harvey Livermore to catch a serial killer by acting as the bait in a honeytrap.

“Livermore and his Major Crime Team are back in Stitch Up! They’re convinced the suave, handsome Denton Kerscher is guilty of two murders, even though he is acquitted of the first in a dramatic court case.

The pressure is still on Kerscher, however, as he is accused of sexually assaulting his new neighbour, busty Barbie Dickinson.

As if Livermore has not got enough on his plate with a demanding wife and fussy senior officer, he is targeted by a former lag, hell bent on revenge. But bright young PC Grace Conteh puts her life at risk to catch the killer.”

Tony has also written in other genres, including fantasy adventure Secret Potion, which bestselling author Jessica Duchan says is ideal for Harry Potter fans of all ages, and celebrity book My Life With The Stars – Sizzling Secrets Spilled!

My Life With The Stars was so successful that a second edition was published and soared to No. 1 bestseller in its Amazon category. Tony provides revelations and amusing anecdotes about showbiz and sports personalities, including Elvis Presley, Eric Morecambe, Joan Collins, George Best, Kylie Minogue, Muhammad Ali and a host of others.

Purple Mist is for both older children and adults. Among those who have recommended it are former Coronation Street star Brian Capron. He says: “Don’t you just love it when bullies get their comeuppance? That’s just the start to Purple Mist, a wonderful adventure story full of thrills and spills that is literally out of this world!”

Mr and Mrs Flood give donations from sales to Children with Cancer UK. Details of their books are available on www.celebritiesconfessions.com and www.fantasyadventurebooks.com