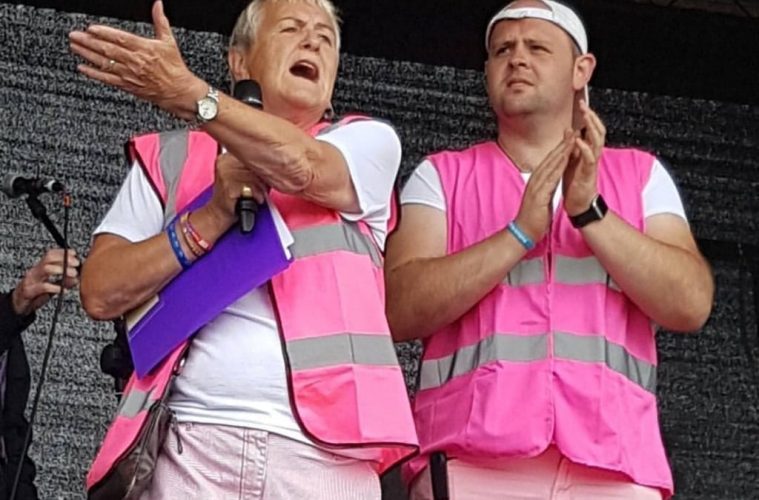 Eastbourne campaigner recognised for her work battling for equality

BETTY Gallacher – or Scotty as most people know her – has been campaigning for more than 40 years.

Whether it be as a trade union rep fighting for better staff wages or as a gay woman battling for equality, Betty has always stood up for what she believes is right.

Now the Eastbourne resident has been honoured with a special booklet printed telling her incredible life story.

It will be launched later this month by the Unite union at a special online Zoom meeting.

It’s called Betty Gallacher: Standing up for all workers.

Unite is interviewing activists from its past and Betty is only the nineth person to receive such an accolade.

Betty said: “I am absolutely thrilled to have been recognised nationally in this way.

“It is a great honour and I feel very humbled.

“But the battles go on and there is so much to campaign for.”

Betty moved to Eastbourne with partner Mandy, a far cry from growing up in Scotland.

She said: “I lived in Scotland until I was 17. I knew I was different from the age of about 13.

“In those days you thought you were the only one. Life was so very lonely.

“I went into the Army at the age of 17 because I knew that there would be people there who were like me.

“Yet within eight months I had been thrown out because of what was referred to as ‘lesbian tendencies.’

“My mum had died when I was just 11 and the first my dad knew was when the letter arrived from the Army explaining why I had left.

“I hadn’t told them the truth, I couldn’t, but suddenly my family found out from this one letter.

“There were three of us who were discharged at the same time, and all ridiculously for having lesbian tendencies.”

Betty then worked in the Outer Hebrides for three years in a Naffi shop selling items to members of the armed forces.

“Incredibly, the Army told my boss there why I was forced to leave the army but he refused to sack me and instead backed me.

“Some people forget but that’s what life was like in those days.”

Aged 20, she moved to London and worked in a butcher’s shop before joining London Transport.

“In those days women were not allowed to become drivers so I was a conductor for 17 years and then a driver for 25 years.

“I ended up being responsible for more than 4,500 staff but all the time I was fighting for their rights.

“I became a union rep because at first I felt frustrated that not enough was being done.

“I was the first female union rep and I can remember fighting to save one of the depots. I was also the union convenor taking on appeals. I never made deals with management; I fought every case on its merit.

“I sat on the regional committee and I was determined to make progress.

“Initially, it was only Lesbian and Gay that were recognised. Then we got the word Bi added and eventually Transgender, which is how we got to the LGBT phrase.

“It was more than a phrase; it was a reflection of how far we had travelled in terms of equality.

“Now I realise the power of a trades union and I always advise staff to join one.

“It’s the unions which have brought about so much change and better equality in society today.”

Betty was just 21 when she met Eileen, 40 at the time, and they were together for 25 years.

She said: “Eileen meant the world to me and when she died from cancer I was devastated.

“I can always remember going to register her death and being asked if we were related.

“I said she was my partner and, in those days,, in 1991, things were still difficult.

“Eventually they allowed me to be recognised as her partner, just like husband and wife.

“It was a horrendously sad time. Half of me had gone. I was suicidal at the time.”

Six years later Betty met Mandy and then retired to Eastbourne in 2011.

She said: “We wanted to get away from the hustle and bustle of London and I had known Eastbourne for many years because I visited regularly on union business and the union owned what is now The View hotel along Eastbourne seafront.

“I can remember back in 2015 going to a LGBT social and everyone had gone by 8.30pm, they said they were off home to bed.

“It was that night that I decided I wanted to do a Pride in Eastbourne.”

There have now been three Prides in Eastbourne, and this year it was cancelled due to Lockdown.

Betty is chair of Bourne Out, a group which supports the LGBT community locally.

She said: “We are there to provide support.

“We have a Drop In cafe open Friday, Saturday and Sunday in Mark Lane and we want to make people aware of this.

“We want to break down even more barriers and also raise awareness of the work and support that we provide.”