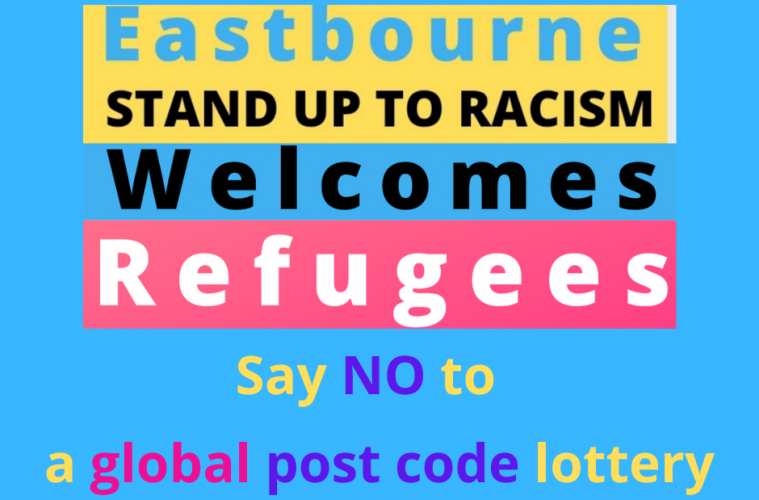 Eastbourne Opinion: Say NO to a Global Postcode Lottery for welcoming refugees

Eastbourne Opinion: Say NO to a Global Postcode Lottery for welcoming refugees

Over 2 million Ukrainian people so far have fled their country after the lethal Putin led invasion; a brutalising act of aggression that has been condemned by ¾ of UN leaders from across the world.

Amid the abject despair, it is heartening to see the huge humanitarian response for the Ukrainian people whose lives have become thrown by destruction and the perils of war. Globally, people have opened their hearts to their plight. Across Europe, Ukrainian people are being welcomed fully and unreservedly during this time of crisis. Most local people agree that Ukrainian refugees should be welcomed to the UK. Many of us are calling on our government to do more. Only 50 or so families given refuge so far. The obstructive UK visa requirements are seeing Ukrainian people sent back to France to sort out the inhibitive paperwork. Described as ‘inhumane’ by French officials. This face of inhumanity towards people fleeing their war-torn country is rightfully being called out. Of course, all countries must do all they can. But please bear with me, as it is important to explore further the ‘inhumanity’ issue being exposed here. The issue I am referring to is:-

are some refugees more welcome than others? (Spoiler alert, the answer is yes.)

Eastbourne Stand Up to Racism stands on a ticket of supporting all refugees. Our welcome is extended to all refugees, regardless of which powers are involved in initiating or perpetuating the wars they are fleeing; and regardless of whether they be white Europeans, or black or brown people from African and Middle Eastern countries such as Yemen, Iraq, Afghanistan, or Syria.

Unfortunately, it is not always the case that there is such clear agreement to welcome refugees so wholeheartedly. Otherwise good people can be led into taking the most inhumane of positions. Otherwise good people, (without properly understanding the realities involved, having been led by inaccurate and heavily biased information), picking and choosing only the supposedly ‘deserving refugees’ whilst happily seeing others turned away.

In December we had people actively attempting to stop an RNLI rescue in Hastings. Gladly, the backlash to this inhumane action was a huge rise in donations. So, humanity prevailed in that case. And it needs to prevail now. In January we had 30 people drown in the Channel whilst the French and English authorities, argued it out, who should be doing the rescuing. These asylum seekers were not being welcomed wholeheartedly.

My plea to everyone is for us not to be exclusive in who it is we consider is the ‘worthy cause’ and who we would rather see turned away. Picking and choosing and elevating some refugees above others. Do we really want to see a Global Post Code Lottery for those fleeing war?

Consider the reports of the appalling treatment of refugees on the Poland-Belarus border. Where people fleeing countries like Afghanistan, Iraq and Syria were trapped at the border in freezing temperatures. Met with violence at the border, turned away and illegally denied their right to seek asylum. Told by the Belarusian authorities to swim across a freezing river to Poland and told by the Polish authorities to swim back again. Truly shocking. Poland has opened multiple entry points for Ukrainian refugees fleeing the war in their country. This is the humanitarian response that all those fleeing war ought to be afforded. So, I ask again, are some refugees more welcome than others?

There have been distressing reports, including video footage, showing people of colour, trying to escape the war in Ukraine, being denied passage on trains. Ordered off the trains. And there have been totally unacceptable narratives in some of the reporting e.g., that the Ukrainian refugees are “just like us” “they are European”, “they are white”, “they are intelligent”, “they are educated people”, “they are not like the refugees we’re used to”. Truly appalling racist narratives being allowed to pass almost without comment or even raised eyebrows.

Absolutely, there is no question that people fleeing the conflict in Ukraine (whatever their ethnic origin) need refuge and assistance. But equally, there is no question that those fleeing Yemen, Syria Iraq, Kurdistan, or Afghanistan also need refuge and assistance. The idea that there should be some sort of hierarchy when dealing with refugees, especially one based on the colour of their skin or their ethnic origin, is something that should elicit universal disgust and condemnation.

Bigotry surely has no place in humanitarian aid?

Eastbourne Stand Up to Racism