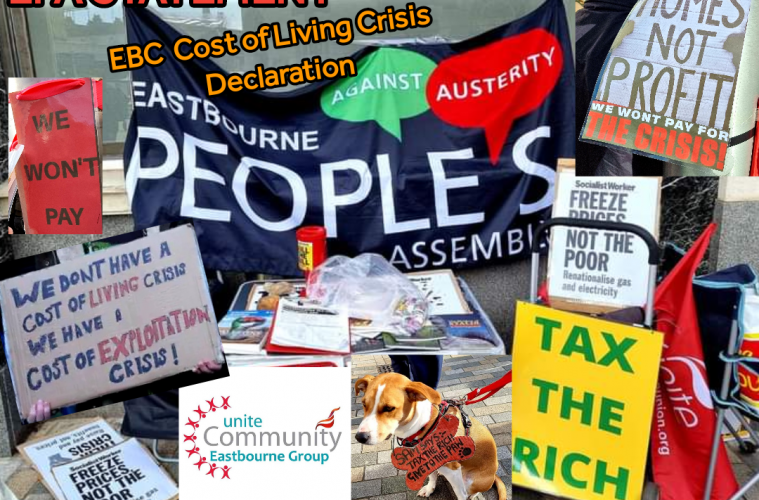 At Wednesday’s full council meeting, Eastbourne Borough Council declared a cost of living emergency. Eastbourne is the first council to do so, we are told.

YES. Councils do need to stand up to Central Government, so we hope more Councils follow. But let’s not forget the lead in period to this time.

The People’s Assembly Against Austerity set up in 2013 to campaign against Tory/Lib Dem led austerity. We’ve now had over a decade of austerity cuts that has parred our local services to the barest statutory minimum with many people left unsupported and isolated in their need.

The 2010/2015 Coalition Government keenly (ruthlessly?) upheld a free market, ‘reduce the state’, elitist ideology. This ideology was used to usher in austerity as a so called ‘solution’ to paying for the Banker’s Crisis’. But. It was clear where this ideology and all the cuts were headed. The phony, hand bag economics being peddled by the Coalition was little more than a disguise for financially clobbering those amongst us who could least afford to pay for the Banker’s Crisis; whilst lining the pockets of the rich.

Some call that class war. Socialism for the rich banks being bailed out and ‘let them eat cake’ for the rest of us. (Now it’s ‘let them budget better, cook better, get better jobs etc).

So let’s not be hoodwinked here. Both our Conservative and our Lib Dem politicians had little thought for those left struggling at that time. This disregard was then politically compounded in the 2015 General Election when the main opposition party didn’t come out as fully opposing austerity either. It was all about ‘austerity lite’.

During those early days of full on austerity, Eastbourne People’s Assembly called upon Local Authorities to stand up to Central Government about cutting the local authority maintenance grants. But sadly, at that time, too many politicians went along with it all and were NOT prepared to take a stand.

Perhaps it was not politically expedient to do so at that time?