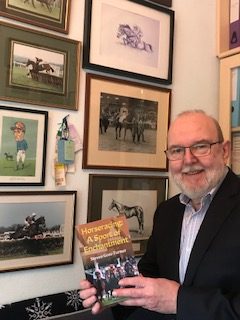 Retired academic Steven Goss-Turner has been under the spell of horseracing from his teenage years.

Now the 68-year-old from Eastbourne has finally published his fascinating findings into where the magic comes from in one of the country’s oldest sports.

Horseracing: A Sport of Enchantment has already reached number one in Amazon’s equestrian charts and been given five-star reviews from critics.

Steven, who was a lecturer, researcher and manager at the University of Brighton, admits his latest book is much more than an historical look at the sport he loves.

He said: “In Horseracing: A Sport of Enchantment I wanted to stress the importance of the sport, its role in our society and globally, based on the beauty and harmony of the ancient partnership of horse and human.

“I also wanted to explore just what makes the sport enchanting and appealing to so many people, but also why it must address aspects which can lead to significant disenchantment and criticism.

“There are many controversial issues, such as use of the whip, equine injury and fatality, workforce diversity, gender and gambling addictions.

“This book is ultimately an exploration of the sport of horseracing through the lens of enchantment, by reviewing its curious history, importance to society and culture, and its dilemmas, and by reflection of my own involvement from a very early age as television viewer, racegoer, punter and partner-owner in two racehorses.”

The PhD holder has authored and co-authored a total of ten books on management and human resources within the sport, leisure and hospitality sectors.

But Horseracing: A Sport of Enchantment is his most personal publication to date.As well as substantially researching the history and cultural elements of horseracing, Steven dug deep into the archives of his own family.ead of School

“I wanted a writing project during retirement and there was a sense of it being a good time to reflect on my own journey toward enchantment in horseracing and why it has been a lifetime’s interest and preoccupation.

“Horseracing: A Sport of Enchantment is semi-autobiographical in approach; there is nostalgia, emotion and humour as I draw on a lifetime of involvement.”

Reviewers have described Horseracing: A Sport of Enchantment as ‘an all-encompassing book’, ‘beautifully written’ and ‘loved it’.

For more information visit Amazon and search for Steven Goss-Turner, where the Kindle and paperback versions of Horseracing: A Sport of Enchantment are available.