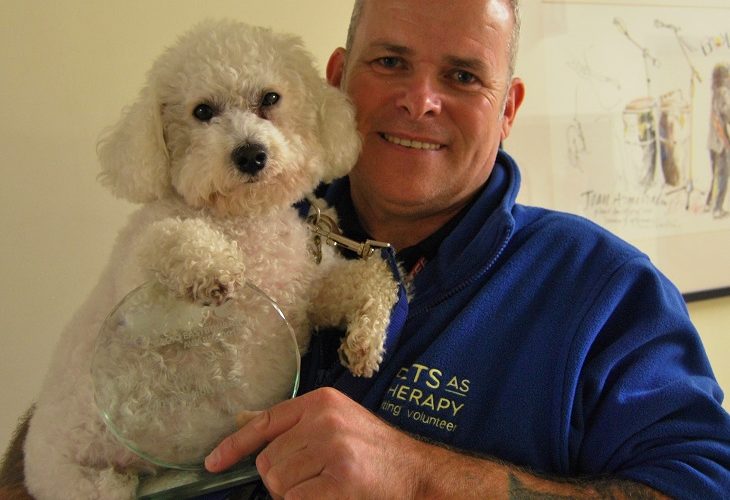 AN amazing couple from Eastbourne have made it through to the Animal Partnership Award Finals for The Armed Forces Community Awards.

After leaving the army in 1991, Barry Coase suffered constant pain, insomnia, sadness and depression, and was later diagnosed with CPTSD. He became shy, introverted and angry.

Beautiful Bella Bichon came into his life in 2015 at the age of 21 weeks, following a traumatic start in life. Filthy, fearful and feral, she crawled towards Barry and lay shaking. It was immediately obvious that there was something very special about this little dog. During the night, as Bella became aware that Barry was struggling with nightmares, she licked his neck, soothing and helping him to settle.Continue Reading

Barry’s confidence quickly grew. Bella passed her Pets as Therapy assessment in 2016 and then qualified as an owner-trained Assistance Dog. The duo began volunteering locally at hospitals and schools, then Barry became confident enough to give talks on Animal Assisted Therapies for Palliative Care, End of Life moments, Intensive Care and Children’s Wards.
Barry missed the comradery of army life and knew that other veterans may be struggling too. He approached Combat Stress to offer his and Bella’s support. Within weeks they became an essential part of the Clinical Therapeutic Team.

“Bella recognises people needing support. She uses Deep Pressure Therapy, leaning into them so that they stroke her and, in doing so, release endorphins, giving a sense of calm. Then, using his own empathy, Barry allows veterans to relax so that talking is easier.”

Barry and Bella promote veterans’ mental health awareness at every opportunity – including at the Brighton Marathon, air shows and with the Armoured Corp Display Teams, as well as in local superstores and shopping centres. They are also established members of a local veterans’ drop-in charity where they welcome new veterans and enrich their lives. Since finding each other, Barry’s life has become one of joy, hope and purpose, as has Bella’s.

“Barry & Bella are making a difference! This Dynamic Duo are proud to have won several local awards and accolades. Seeing hope and happiness in people’s eyes is priceless.”

You can vote for the Eastbourne pair now.