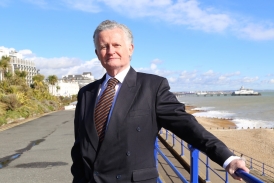 They did not agree with the motion to support the Climate and Ecological Emergency Bill which is sponsored by radical environmental group Extinction Rebellion, amongst others.
At a meeting of the full Council on 17 November the Liberal Democrat members proposed a motion to support this Bill which Tories say would result in political chaos and ride roughshod over democracy by creating an unaccountable citizen’s assembly which would decide policy instead of elected representatives.
Councillor Penny di Cara, Deputy Leader of the Conservative Group and Shadow Portfolio Holder for Climate Change said, “The Government is bringing forward a landmark Environment Bill to restore nature and build back better from the pandemic.
Support for the Climate and Ecological Emergency Bill is political posturing which will do nothing for the people of Eastbourne or the aim for net zero emissions.”
Councillor Robert Smart, Leader fo the Conservative Group added, “We only have four Full Council meetings a year and yet the precarious financial position of the Council is not even on the agenda, whilst the LibDems prioritise campaign issues which are out of their control.”