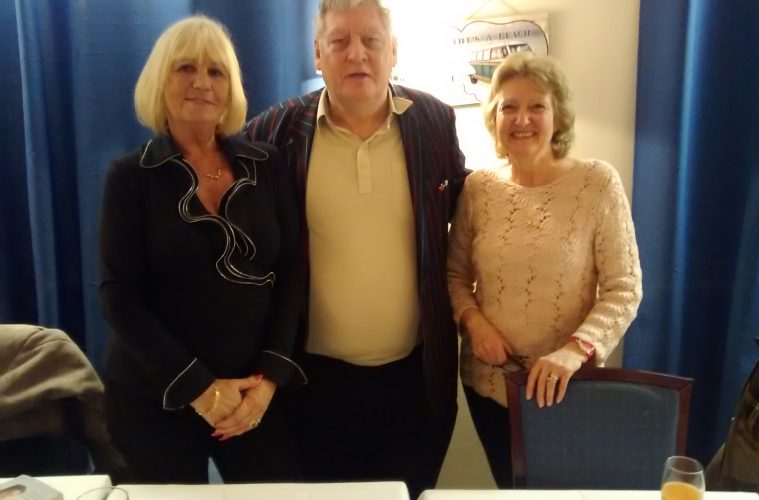 Eastbourne’s best-selling author Tamara McKinley announced that she will be coming out of retirement
when appearing as Anderida Writers patron at their annual meeting at the Hydro Hotel on Tuesday, April 12
Secretary Heather Flood said: “It’s great news that Tamara is returning to her laptop following a spell in retirement. Welcome back Tamara or should I say Ellie Dean, the name under which she writes her acclaimed Cliffehaven series that has sold more than a million copies in the UK alone.”
Tamara added: “I have now started writing the 19th book in the Cliffehaven series after taking a break following the death of my husband Ollie in December 2020.”
Tamara urged Anderida members to support their other talented authors including Heather and Tony Flood, who have successfully launched their new book Laughs and Tears Galore! Stories and Poems with Twists, for which ‘Ellie Dean’ gave a glowing endorsement.
She said: “We should all be supportive of our authors and write reviews about their books. It doesn’t take much time and can be so helpful to them.”
Heather added: “A lot of our authors have produced entertaining reads. So please check out books by Dave Appleby, John Newton, Pat Chapman, Francis Wait, Laurie Wilkinson, Alex Hudson, Phillipa Drake, Jim Whelan, Beryl Teso, Denis Mackriever, Dave Wells and others. And Mike Fleming is in the process of writing a new book.”
The Anderida Accolade for services to the club in the past year was given to Francis Wait for undertaking the role of treasurer in addition to membership secretary and competition secretary. The award was presented to Francis by the previous winner, chairman Tony Flood.
Mr Flood also announced that a special award for outstanding service over 15 years was being made to Dave Wells.
Tony and Heather paid tribute to the late Rod Colley, who “like Alan Baker and Ollie Cater, will be fondly remembered as a lovely man and a great supporter of the club.”
A vote of thanks was given to Mr Flood for “keeping the Anderida ship afloat during the choppy seas of COVID with his sterling work in five different roles.”
Anderida reported a healthy bank balance of £639.58.
Officers elected were: Patron – Tamara McKinley; President – Tony Flood; Vice President – Brian Capron;
Chairman – Tony Flood; Vice Chairman – Nigel Gearing; Secretary – Heather Flood; Assistant Secretary – Christine Racher; Treasurer – Francis Wait; Assistant treasurer – Michael Racher; Competition secretary – Francis Wait; Assistant competition secretary – Tamara McKinley; Newsletter editor – Tony Flood; Membership secretary – Francis Wait; website joint editors – Tony Flood and Denis Stidder; Website administrator – Alistair Colley; Facebook page administrators – Tony Flood and Alistair Colley; Publicity and marketing officer – Tony Flood.