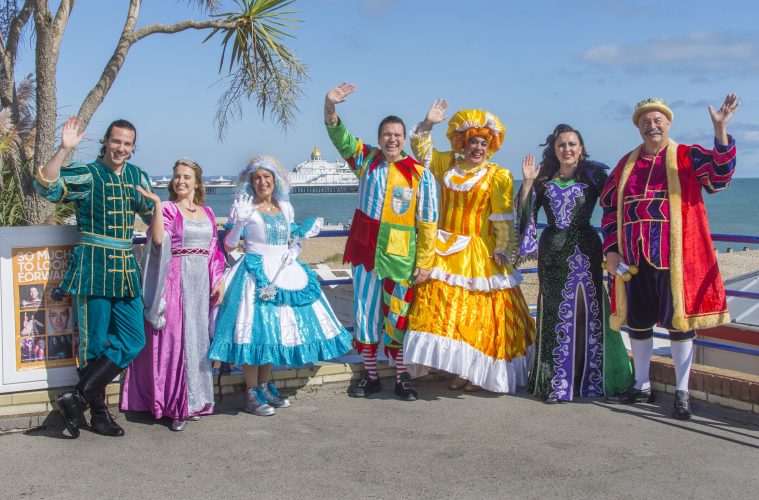 The cast of this year’s Eastbourne Devonshire Park Theatre pantomime, Sleeping Beauty, gathered in Eastbourne for the first time on Friday 24 September to officially launch the show.

The cast includes returning favourites Marytn Knight as Dame Nellie and Tucker as Chester the Jester plus Karen Mann as Fairy, and new faces for Eastbourne, Carli Norris as Carabosse, Nicholas Pound as King Clarence, Rebecca Hoyle as Beauty and Ashley Emerson as Prince Valliant.

The show which opens at the Devonshire Park on Friday 10 December is the 20th pantomime from the Eastbourne Theatres team. Sleeping Beauty will be presented with all the colour and spectacle audiences have come to expect with surprises galore!

The weather on Friday was good so the cast posed for photos on stage, outside the Devonshire Park and even managed a trip down to the Seafront for photos on the promenade and beach.

It is a local job for Eastbourne residents, comic Tucker who is more used to working internationally on numerous cruise ships and West End actor Nicholas Pound who both live in the town. Karen Mann, who has previously appeared at the Devonshire Park in The Hot Mikado and pantomimes Robin Hood and Jack and the Beanstalk made the trip to Eastbourne from her home in nearby St Leonards.

Martyn Knight reunites with his long-term sidekick Tucker in Sleeping Beauty and while 2020 saw a hiatus of the pantomime, their chemistry hasn’t diminished, within 30 seconds of seeing each other there were belly-laughs backstage between them both. The script for this year’s show will see them continuing the laughs on stage with plenty of raucous silliness planned!