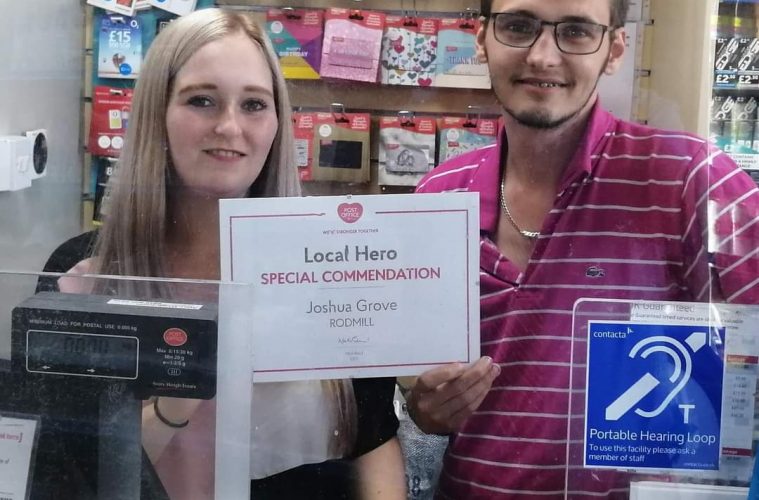 Josh proves he is a true community hero

Eastbourne’s Josh proves he is a true community hero

IT was in April 2018 when at the age of 23 Josh Grove became the youngest postmaster in the country.

He was helping to run a Post Office in Brighton and he was splitting his time between the city and Tonbridge in Kent.

He’d never been to Eastbourne.

But when he heard was that Rodmill Post Office was on the market, he made the bold move to buy it.

Little would he know what would happen within two years and Lockdown.

Josh, now 26, recalls: “I realised that the time was right to take over a business on my own and I quickly sensed the strong community feel.

“Everything was going normally but then in January last year we suddenly began to notice that some of our regulars were no longer coming in.

“It was very early, January 28, when we started doing deliveries to our customers but then we didn’t realise what was in front of us all.”​

At the height of Lockdown one, Josh and partner Hannah were doing up to 120 deliveries a day. It kept the business going as footfall in the shop dropped off dramatically.

Josh said: “We were delivering all round, from here to Langney, Polegate and elsewhere and to a mixture of age ranges too, it wasn’t just the elderly as one might imagine.

“Everyone at that time dealing with the unknown.

“We wanted to help out and we wanted to make real difference because there was, and still, such a huge need.”

In April, they donated £1500 of soft drinks and snacks to frontline NHS staff at the DGH.

Three months later, Josh was named a Local Hero by the Post Office for his community work and desire to go that extra mile.

It was part of the Post Office’s We Stronger Together Awards and Josh won the Local Hero accolade for the South East.

Josh said he was delighted and honoured to win the award and thanked customers for their support.

But of course, it didn’t end there.

Josh said: “Even when restrictions were partially lifted, we were still doing up to 30 deliveries a day but in a more focused area around Old Town and Rodmill.

“Xmas was always going to be our busiest time so we focused more on the shop’s opening hours.

“Now we are back in Lockdown, footfall is higher than it was back in March but it’s still lower than what we could consider normal.

Partner Hannah is now off on maternity leave and Josh is keen to remain that community focus.

I ask him about the future and the potential to expand?

“Who knows? Nobody knows. It’s all still very uncertain.”