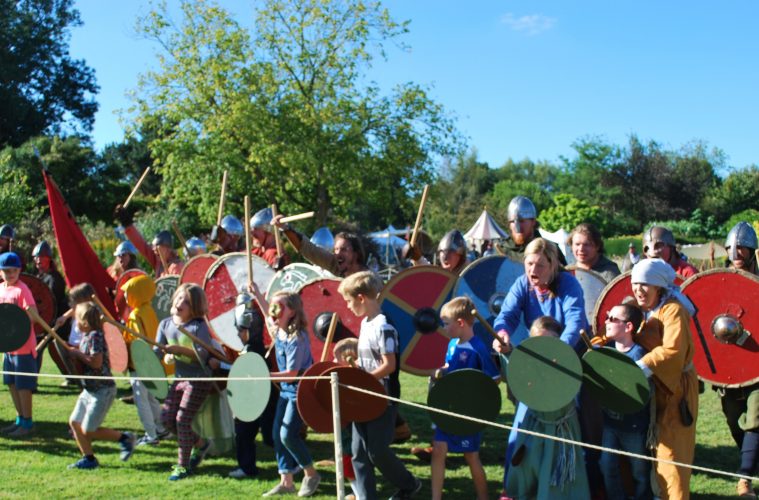 Sussex in the Middle Ages will be brought to life this September as Michelham Priory House & Gardens is transformed for its Medieval Weekend.

Living history camps will descend on the grounds at the historic site in Upper Dicker, near Hailsham, for the weekend of 04 and 05 September, to show how people lived, worked and played in the 12th and 13th centuries.

Medieval villagers will prepare traditional meals and demonstrate their artistry in crafts such as hand-weaving and natural dying – as well as showing off their sword and shield skills on the battlefield. The encampments promise to be abuzz with the sights and sounds of medieval traders.

Visitors will be able to watch the Michelham bowmen show off their long-bow archery skills and have a go at a range of crafts. Children can take part in a

Medieval trail around the site, or even get involved in hobby-horse jousting.

Michelham Priory House & Gardens, which is owned by Sussex Archaeological Society, dates from 1229 and is set within a stunning island, surrounded by the largest medieval moat in the country.

“The encampments provide a live action window into a fascinating period in history, which was a time of great social change. It’s a really interactive experience – people can walk right up to our medieval enthusiasts and experts and ask them about how people lived.

“There are plenty of great activities for children, from hobby horse jousting to themed crafts, as well as archery displays from our very own Michelham bowmen. It’s always a fun and educational day out for all the family.”

The Medieval Weekend will run from 10.30am until 5pm on both days and advance tickets, bookable online, start at £9.70 for adults, £4.65 for children and £8.80 for seniors. Family tickets start at £14.40 for one adult and up to three children, and £25 for two adults and up to four children.

Members, carers of visitors with disabilities and children under the age of five go free. Tickets can be purchased at www.sussexpast.co.uk or on the door.

Michelham Priory House & Gardens is among the historic sites owned and cared for by Sussex Past – the trading name of the Sussex Archaeological Society.

The county’s largest heritage-based organisation and charity cares for eight Sussex Past attractions, including Lewes Castle & Museum, Fishbourne Roman Palace near Chichester and the Long Man of Wilmington, and is celebrating its 175th anniversary this year.

After almost two centuries of protecting heritage sites and artefacts which shed light on thousands of years of Sussex stories, a special exhibition of diverse artefacts and archaeological discoveries, The Sussex Archaeological Society: 175 Years of Collecting, is at the Barbican House Museum at Lewes Castle until 28 February 2022.