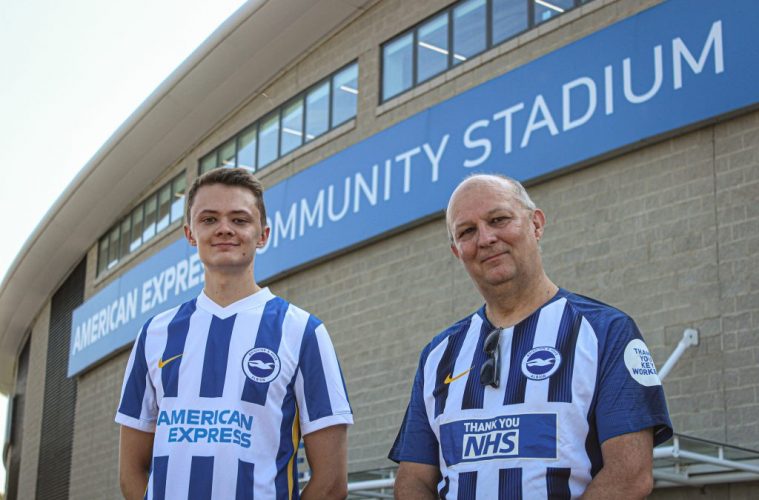 Alastair FitzSimons and his two children will be walking from Winchester to Eastbourne for his latest charitable act.

Another day, another opportunity to fundraise for Albion in the Community (AITC).

Alastair FitzSimons is no stranger to fundraising, as he is set to embark on another challenge to raise money for AITC.

The Brighton & Hove Albion season ticket holder has taken part in a number of fundraising events for the charity, which include quizzes and cycle rides.

On one occasion, Alastair and his son Alex were at the Amex Stadium cheering on the Seagulls. Here, they saw an advertisement for the Brighton to Brussels bike ride, where Alex encouraged his father to take part.

400km later, Alastair raised £1,000. He’s also gone on to do the Brussels to Amsterdam expedition, as well as a number of Brighton Breezy AITC rides.

However, the fundraiser is now turning his attention towards his next challenge.

“We are walking from Winchester to Eastbourne, and we are starting on the 9th   of August and finishing on the 15th,” Alastair said. “The shortest day is 12 miles, and the longest day is 17 miles.”

Although this time, Alastair won’t be making the 100-mile expedition entirely by himself. For this challenge, the father will be accompanied by his two children at various stages of the walk.

His son Alex, who is currently a student at Sheffield Hallam University, is a keen Albion supporter just like his father. When asked if he was proud of the connection between AITC and the football club, he said with confidence, “yes!”.

“What AITC do in the community is quite obvious and when you come to the Amex Stadium, they are quite public about the connection. Based on the work I’ve seen, it’s a great charity.”

Alastair later added: “Talking to the people who are involved with the charity and seeing the people who benefit from it, you can’t fail to be impressed by both – it’s tremendous.”

If you would like to support Alastair and the FitzSimons family in their quest to raise money for AITC, you can support them via their JustGiving page: https://www.justgiving.com/fundraising/alastair-fitzsimons3