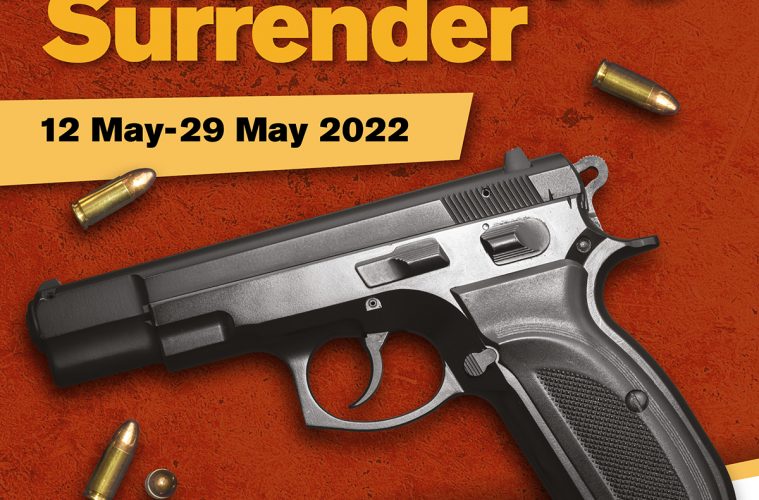 People in possession of unwanted guns or ammunition are being encouraged to hand them in as part of a campaign to make Sussex and Surrey safer.

Many firearms are held in innocence and without awareness of their illegality or are overlooked and forgotten in people’s homes.

Others are acquired and distributed by criminal networks to harm, threaten and intimidate their local communities.

This appeal gives people the chance to dispose of firearms or ammunition by handing them in at their local police station.

The surrender, which runs from Thursday, May 12 to Sunday, May 29 forms part of a national campaign by the National Ballistics Intelligence Service (NABIS).

The aim of the operation, supported by Surrey and Sussex Police, is to reduce the number of illegally held firearms in circulation which could fall into the hands of criminals.

We are also encouraging current and previous military personnel to hand in any items kept as war trophies.

Superintendent Graham Barnett from Surrey Police and Sussex Police Joint Operations Command said: “If you have firearms or ammunition that you don’t know how to safely dispose of, we can help.

“By surrendering your weapons now, it will prevent them falling into the hands of criminals and endangering the public.

“Surrey Police and Sussex Police are participating in this firearms surrender alongside our colleagues across the country and this is a good opportunity for anyone who has a firearm or ammunition that they want to get rid of, to do so safely.

“Perhaps there’s something which has come into your family as a ‘war trophy’, or has been handed down as an antique.

“You might have found something when clearing out a loft or garage, or you may have been given something to store on behalf of somebody else.

“Whether what you have is illegal or not, and whatever and however you came to have it, if you no longer want it, please hand it in.

“I also ask anyone who knows anything about an illegal firearm and who wants to report this anonymously, to do so into Crimestoppers on 0800 555 111.”

During the two-week campaign, those surrendering firearms will not face prosecution for the illegal possession upon surrender.

Furthermore, lawful gun licence-holders can be reassured that these measures merely enhance their rights and privileges to own firearms, by removing the dangerous ones from the wrong hands. They are also encouraged to use this campaign to consider the surrender of weapons they no longer have any use for.

Superintendent Barnett added: “I’d like to clarify that this is a firearms surrender and not a general firearms amnesty for the previous lifetime of the firearm; an amnesty will be granted for police possession of an item only at the point of handover (surrender).

“The fight against gun crime is stronger than ever, and we are working with partners and our local communities to safeguard, educate and intervene at the earliest opportunity. We take all reports of incidents involving firearms extremely seriously, and robust action will be taken against anyone who commits a firearms related offence.”

Any deactivated firearm deactivated prior to the new specifications of March 5, 2018 (UK implementation date 28 June 2018) is a ‘defectively-deactivated’ firearm and cannot be sold, purchased or gifted, but possession on the other hand is permitted.

Firearms that do meet the 2018 specification and offered for sale or gift must be accompanied by their deactivation certificate (issued by a proof house anywhere within the EU). You can find more information online here.