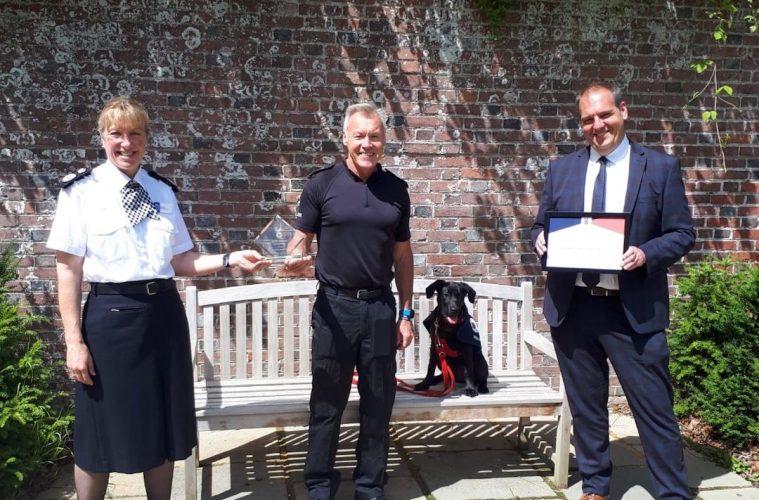 Two initiatives introduced to support the welfare of police officers in Sussex have been recognised in a national awards event.

The Sleep Project was named as the winner of the Personal Resilience category of the 2020 Oscar Kilo Awards, while the Sussex Cliff Death/Serious Injury (DSI) Support Protocol was named as a Runner-up in the Protecting the Workforce category.

Oscar Kilo is the home of the National Police Wellbeing Service and brings assessment, learning and conversation about emergency services wellbeing into one place.

Its awards seek to recognise the steps emergency services have taken to support the emotional and physical welfare of their frontline staff and employees.

The Sleep Project was introduced by the Surrey Police and Sussex Police wellbeing team to address feedback from officers and staff about a lack of quality sleep, which can impact upon performance, safety and decision making, as well as health and wellbeing.

The forces worked with Sleep Scientist Dr Sophie Bostock to come up with practical tips, advice and support to aid and improve sleep.

In August 2020, the first of several webinars were held with an audience of more than 80 officers and staff. The feedback was overwhelmingly positive and 85 per cent of participants changed their sleeping habits as a result.

Owing to the success of the project in Surrey and Sussex, Oscar Kilo is now running a highly-successful Better Sleep Series which can be accessed by officers and staff across the UK.

Project lead Sgt Garry Botterill said: “Fatigue and sleep problems within the police can cause health problems and impair effectiveness so it is vital we do all we can to help address the issues.

“While shift working and long hours are often essential in order to fight crime and keep people safe they can also compound the situation.

“We wanted to explore the actual reasons for loss of sleep and fatigue and work with an expert to provide solutions. The Sleep Project was an interactive way to learn about issues and provide targeted advice and support for our hard working officers and staff.”

The Sussex Cliff DSI Support Protocol was introduced in East Sussex in response to concerns for the wellbeing of officers regularly having to respond to incidents involving death or serious injury along the coast.

A version of the protocol was originally implemented in November 2019 and after a review in July 2020, was amended and fully embedded in August 2020.

The protocol complements the existing support initiatives in place across the force, and has received positive feedback since its introduction.

Chief Superintendent Tanya Jones, divisional commander for East Sussex, said: “Policing is an incredibly rewarding job, but it can also be very distressing when faced with difficult and emotional situations on a daily basis.

“It is important for us to recognise the impact it can have on an officer’s welfare when they are regularly exposed to incidents of trauma. Of particular relevance to East Sussex, is the trauma associated with incidents involving death and serious injury at the cliffs.

“The protocol ensures frontline officers are given the necessary support and time to process and deal with any trauma experienced. They are given the opportunity to talk about the matter and take advantage of support offered by their line manager and partner agencies.

“The protocol has had a really positive reaction among officers and their supervisors, and we are delighted to see it recognised by Oscar Kilo as well.

“We will continue to explore ways in which we can support our officers with their emotional and physical wellbeing as they continue to carry out such invaluable work in our community.”

Sussex Police & Crime Commissioner Katy Bourne said: “Sussex Police have frequently been acknowledged as a conscientious and caring employer so I am delighted to see that the force has been recognised with these awards.

“Officers and staff are the beating heart of Sussex Police, often working in extremely challenging circumstances. I’m determined that they should be protected in all aspects of their wellbeing.”