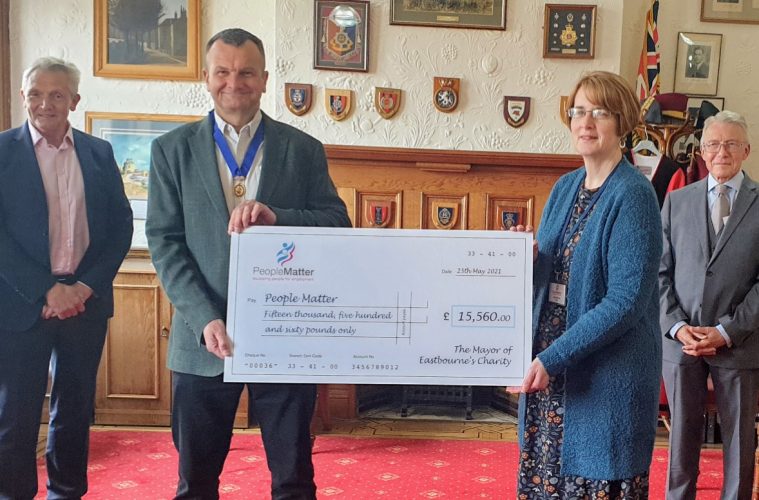 The former Mayor of Eastbourne raised £15,560 for jobseekers’ charity People Matter during his two terms in office despite Covid-19 preventing fundraising events being held in the second year.

Councillor Steve Wallis, who handed over to new Mayor Pat Rodohan last week, presented his chosen charity with a cheque at an event in the Mayor’s Parlour last night (Tuesday, May 25).

Councillor Wallis said: “I am delighted to be able to support People Matter with such a large sum of money, especially given that we were unable to hold any fundraising events in my second year as Mayor because of the pandemic.

“We originally postponed my main fundraiser, The Mayor’s Big Ticket Charity Event, from March 2020 to March 2021 but it became clear that this could not go ahead and was cancelled.

“I would like to thank the many ticket holders and sponsors who generously donated the cost of their tickets, which was a great boost to our fundraising.”

During the previous year, the Mayor hosted a number of fundraising events including quiz nights and art exhibitions in partnership with the Society of Eastbourne Artists.

People Matter CEO Ann Gillard said: “Wow, what a mayoral two years Steve has enjoyed. Against all the odds, he managed to stay visible and engaged across our community. People Matter could not have asked more of him, and nor could our town.

“We are all so very grateful and the funds raised will help us enormously with the employment challenges ahead.”

With photo of Cllr Wallis (front left) presenting cheque to Ann Gillard with Keith Ridley (back left) and Charles Grimaldi (back right), from People Matter.