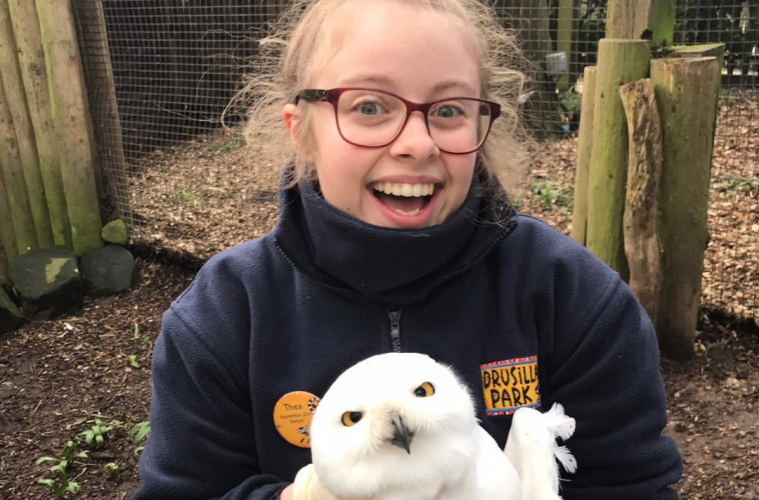 From Drusillas Zoo Visitor, to Apprentice, to Keeper, to Award winner!

From Drusillas Zoo Visitor, to Apprentice, to Keeper, to Award winner!

Drusillas Zoo Park have praised Zookeeper, Thea Fox, for beating off stiff competition last week and walking away as the outright winner of Sussex’ Intermediate Apprentice of the Year.

A keen animal lover, Thea has been visiting Drusillas since she was a child, and took part in the Park’s ‘Keeper for the Day’ experience when she was a little girl. The experience had such an impact on her, that she went on to successfully apply for an apprenticeship at the Sussex Zoo in 2019, working alongside the very same team who accompanied her during her keeper experience. Thea was quickly offered a full time role when her apprenticeship ended, and last week continued her success by becoming an award-winning member of the team.

Thea joined the apprenticeship scheme shortly before the pandemic hit, and despite being a new recruit, played a vital role in keeping the Zoo running during the crisis, ensuring the Zoo’s 800+ animals were still cared for amid national lockdowns.

Thea was crowned Intermediate Apprentice of the Year at the 2021 Sussex Apprenticeship Awards, during a ceremony at Hilton Brighton Metropole last week, and the news has brought some much-needed joy to the Park.

The event celebrated and recognised the individuals and organisations involved in apprenticeships across Sussex. Thea was an outright winner in the Intermediate Apprentice of the Year category – adding to the Top Practical Student Award she won at Plumpton College back in July.

The judges said that Thea had showed ‘magnificent passion’ for the apprenticeship and was to be commended for her ‘dedication and commitment during a very difficult time’.

Thea said in her acceptance speech: “I want to say a massive thank you to Drusillas Park. Without them I wouldn’t be here, and to the Zoo team because they are just amazing and don’t get enough recognition.”

Zoo Business Manager Sue Woodgate, who coordinates the Park’s Apprenticeship schemes said: “We have been running the apprentice scheme for several years and Thea’s win is testament to why it’s so important to support young people into working life in this way. The course is two years with the students attending one college day and four days a week working alongside one of our experienced Keepers.”

Sue continued: “They learn all about animal husbandry, nutrition, enclosure design, law and legislation, animal behaviour and much more over the two years, theoretically on college days and practically on days at Drusillas. Thea joined at one of the most challenging times we’ve ever faced, and not only stepped up during the crisis to take on additional responsibility but became someone who kept everyone’s spirits high with her relentlessly positive and supportive attitude. And, it’s incredibly heart-warming to know that she has come full circle from the little girl who spent a day playing Zookeeper with us.”

Thea was offered a full-time position at the end of her apprenticeship ‘without hesitation’ and is an enormously valued member of the Sussex Zoo team. She is now fully trained on the Zoo’s serval section working closely with servals, owls, guinea pigs, and flamingos.

Drusillas typically take on two apprentices each year, and recently welcomed two new recruits who are getting to know, and working closely with, the Park’s lemurs and penguins as part of their practical training.

The Park’s Keeper for the Day experience has always been an extremely popular offering, with slots booked up well into 2022. If you know a young (or old) animal lover who would

love to spend the day finding out the inner workings of a Zoo, take a look at Drusillas website https://www.drusillas.co.uk/keeper-for-the-day