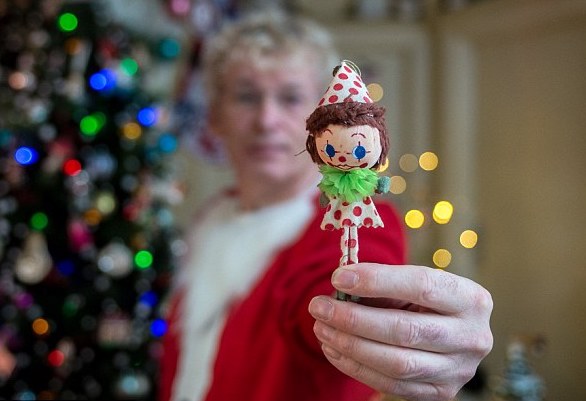 Geoff's going to be a Christmas TV star on Saturday night

IF you want to start to get festive, our gardening feature writer, Geoff Stonebanks, tells us about his second passion, Christmas decorations and the recent filming for an hour-long Channel 5 programme, called “Incredible Christmas Trees and how to decorate them”.

It was a festive run-down of all things Christmas tree and a showcase of amazing Christmas trees from across the world, with experts in the studio providing tips on how to decorate trees and inserts, filmed in private homes like Geoff’s, of beautifully decorated trees.

The production team from Athena Films had been researching possible scenarios and had contacted Geoff through his social media, both Twitter and Instagram, having discovered much already available online about him and his Christmas collection.

After discussion over the phone and agreement with the director, shooting was duly confirmed to take place in the next few days. Geoff has a stash of 25 crates that he stores in a dedicated loft space above his garage and his large collection has already received media coverage in national press and local TV in previous years.

Nikkita and Ollie from Athena, within Covid secure restrictions, spent half a day at Geoff’s home on the 17th of last month, filming part of his amazing collection, gathered over the last 60 years.

Normally, he would not have put his decorations up until 1st December, but with a broadcast deadline looming, the producers needed to ask if he would decorate just one room, ahead of time, to facilitate filming.

So, Geoff spent 4 days to get the required baubles, trees and lights out of the loft and set up in readiness for shooting. He filmed the sequence of setting up the tree himself and created a 1-minute film of the process that he has speeded up and it can be viewed on his Christmas web site, details at end.

Geoff tells us “I always feel, when getting my garden ready to open every year, that I am dressing a film set for visitors to view and the same principle applies with my Christmas decorations. I’m a bit of a perfectionist! The artificial tree takes ages to set up with all the branches having to be just right.

Once assembled, there are 3 strings of lights, one goes top to bottom, up and down the tree, one spirals around bottom to top in one direction and the final one spirals up in the opposite direction. Flashing sequences of the three sets are then adjusted to give the perfect look! Next, tinsel and silver beads are carefully positioned to create evenly balanced swirls all the way up the tree followed by the baubles and other decorations.

The tree in Geoff’s living room alone has 15 metres of tinsel, 1700 fairy lights, over 800 baubles and 10 metres of silver beading!

This is just a fraction of the total collection used to decorate his house in Seaford. Several years ago, a photo shoot was completed for the Daily Mail with all 25 of Geoff’s Christmas trees in one room, all of various sizes, which was a mammoth task to fulfil. You can see many more images of his collection on his web site.

The C5 programme was broadcast at 1835 on Saturday 28th November, so if you missed it, you can catch up and view now on My5 on demand.

Geoff has been interested in Christmas decorations since his early childhood, when his parents had a country pub near Banbury, in Oxfordshire.

Aged 8 or 9, he used to help his mother decorate the 2 public bars and their private accommodation but soon ended up taking over! He went on to decorate the pub, The Dolphin, right up to when his parents retired in 1987, going home every December to fulfil the task. Having left home at 19 and acquiring his first home in London in 1979, he started to collect his own decorations, so by the time his parents retired and he inherited the decorations used to decorate the pub, it was a pretty large hoard.

His eclectic mix includes some delicate pieces from 1930’s Prague, many glass baubles from the 1950’s and 60’s and a wealth of decorations from Woolworths from 1960, through the decades until its demise.

Geoff has a few personal favourites, many of which hang on a 20-inch tall, 1960’s Woolworths tree in a display cabinet. The Pierrot doll on the top was made in the 1960’s by his paternal grandmother from a ping pong ball and pipe cleaners! The small church and 2 figurines bought as gifts by his maternal grandmother, also in the 60’s.

Geoff tells us “It is no mean feat to get this collection down out of the loft and set up every year, even more so to pack it all up again after Christmas and put it back in the loft! By New Year’s Day, even I’ve had enough!”

A wonderful bonus followed filming with Athena Films, a payment was made from them to Geoff, for his work in preparing for the shoot, which has been donated to Macmillan Cancer Support.

Read more of Geoff’s Christmas, present and past, at www.geoffschristmas.co.uk and catch up with the programme at My5