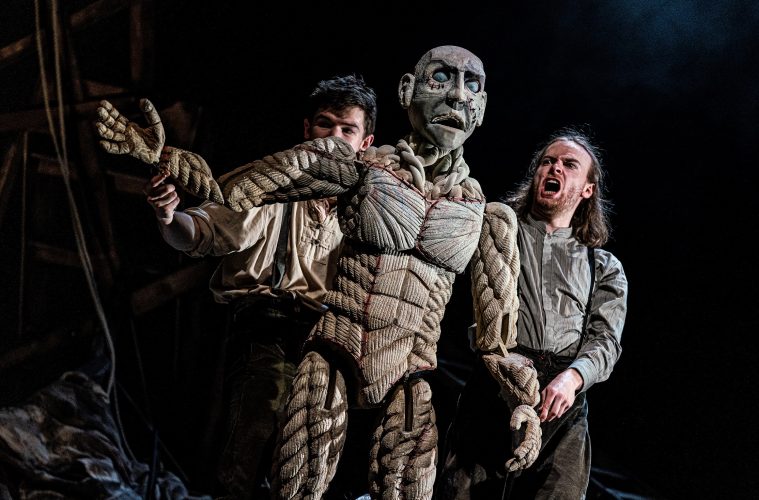 In Geneva 1816, Victor Frankenstein obsesses in the pursuit of nature’s secret, the elixir of life itself. But nothing can prepare him for what he creates, and so begins a gripping life or death adventure taking him to the ends of the earth and beyond.

As well as featuring live music and ensemble storytelling, Blackeyed Theatre’s highly theatrical telling of Shelley’s gothic masterpiece is unique for its use of Bunraku-style puppetry to portray The Creature. Designed and built by Yvonne Stone (Warhorse, His Dark Materials), the 6’4” puppet, operated by up to three actors at any one time, adds an exciting new dimension to the retelling of the classic story.

Director Eliot Giuralarocca said: “For me, the beauty and excitement of theatre is that it is live, unfolding in front of an audience as they watch, and the decision to make the creature a life-sized puppet – beautifully and painstakingly made by Yvonne Stone – seemed to fit perfectly with this approach.”

Adding “Frankenstein is obsessed with re-animating dead matter by finding the spark of creation, the ‘elixir of life’. We bring our creature to life theatrically, animating, manipulating and breathing life into the puppet right in front of the audience and in doing so I hope we present a lovely theatrical metaphor for the act of creation in the story itself and give audiences the chance for audiences to share in that creation.”

Frankenstein is adapted by Nick Lane, who was Associate Director and Literary Manager at Hull Truck from 2006 to 2014, with original music composed by Ron McAllister. The production is directed by Eliot Giuralarocca and musically directed by Ellie Verkerk, while the puppetry is created and directed by Yvonne Stone.

Frankenstein at the Devonshire Park Theatre, Eastbourne from Tuesday 15 – Saturday 19 March, nightly performances at 7.45pm with Wednesday and Saturday Matinees at 2.30pm, tickets priced from £18, age guidance 11+ to book call 01323 412000 or online eastbournetheatres.co.uk