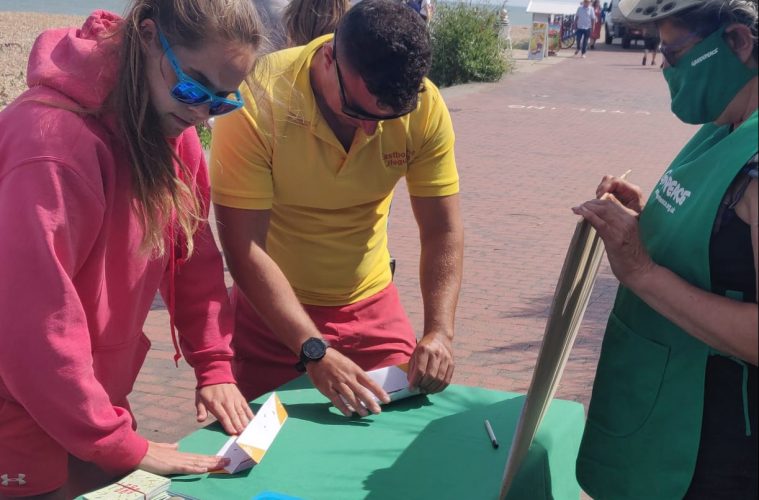 On 24th July and 1st August, volunteers from Greenpeace Eastbourne Group celebrated the launch of Greenpeace’s campaign Operation Ocean Witness, which is taking to the waves this summer in a brand new boat to confront destructive fishing.

At the stalls in Eastbourne and Seaford, local people signed the petition calling on the UK Government to ban supertrawlers, bottom trawlers and fly shooters from UK Marine Protected Areas (MPAs), and 72 also made an origami fish and wrote a personal message about why they care about protecting our oceans.  The origami fish messages are being stored on the boat in big fishing nets and will be delivered directly to Parliament in mid-September.

Evie from Eastbourne said ‘On Saturday, we spoke to lots of local people who are on board with the need for the UK Government to ban destructive fishing from UK Marine Protected Areas. We also heard lots of stories of people’s memories of the seaside and how a ban would revive hard hit coastal communities.’

Operation Ocean Witness is the latest step in Greenpeace’s campaign to protect our oceans. Earlier this year, Greenpeace Eastbourne Group hosted online screenings of Greenpeace’s docu-series Ocean Witness. In May, hundreds of people across the UK protested against deep sea mining. Then earlier in July, Greenpeace ship the Sea Beaver stopped bottom trawlers from fishing in the Offshore Overfalls Marine Protected Area off the Sussex coast.

Last year, 84 MPs from across Parliament, and 29 Conservative MPs, wrote to the Secretary of State for the Environment, George Eustice, calling for a ban on destructive industrial fishing in UK marine protected areas [2]. Polling for Greenpeace by YouGov has also found that 4 out of 5 UK adults want supertrawlers banned from UK protected areas [3].

The prime minister hinted at a supertrawler ban in January, as part of his commitment to level up the UK’s seas after Brexit. Speaking to Andrew Marr, Boris Johnson said that after Brexit the UK “will be able to ban these huge hoover trawlers” [4]. This has not happened.

Evie continued ‘No more excuses, it’s time to get ocean protection done. As a coastal town, we know how important our oceans are for local fishers, tourism and tackling climate change. To truly be the world leader in marine protection that it claims to be, the Government needs to ban supertrawlers, fly shooters and bottom trawlers from MPAs now.’

The next stalls will be on 12th, 21st, and 28th August at the bottom of the Wish Tower slope in Eastbourne, weather dependent.