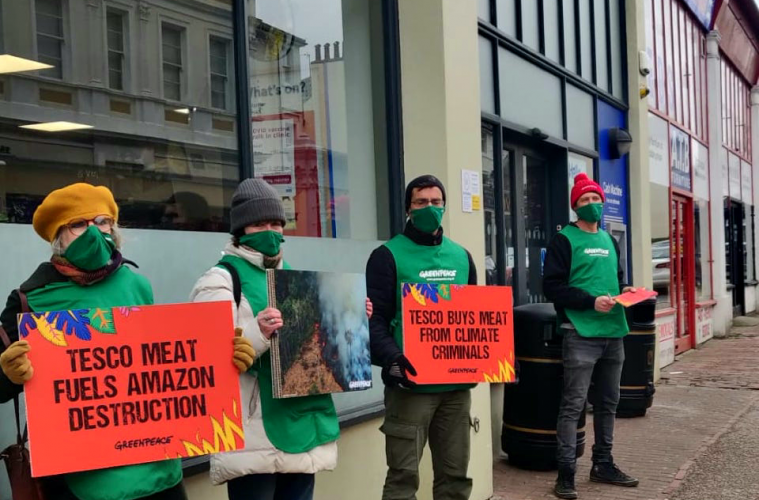 Greenpeace volunteers visited a Tesco store in Seaside Road, and held a demonstration calling on Tesco to drop climate criminal meat producers from its supply chain. This was one of around 50 demonstrations happening across the UK in March.

Volunteers created a red line with placards, to symbolise the line that Tesco is crossing by continuing to do business with forest destroying meat supplier JBS. They held up placards with shocking photos of the Amazon rainforest being destroyed due to deliberate fires, and signs reading ‘Tesco meat fuels Amazon destruction’, ‘Tesco breaks its climate promises’ and ‘Tesco buys meat from climate criminals’.

Some passersby signed the petition, which totals more than 263,000 signatures, and invited customers to hand in a message to the store manager. The petition and the message call on Tesco to drop forest destroying companies from its supply chain, and replace at least half of the meat it sells with affordable plant based alternatives by 2025.

‘Tesco must think its customers are fools if it believes it can say it is acting on deforestation and yet it continues to fund one of the worst forest destroyers in the Amazon. Greenpeace Eastbourne will keep letting shoppers know that Tesco meat fuels deforestation until it takes proper action to remove deforestation from its supply chain and drops JBS. The Amazon plays a critical role for the world’s climate – because it stores so much carbon. If we lose the Amazon, we lose the fight on climate change.’

People who would like to take action at their local Tesco store can order a free action pack at act.gp/tesco-pack to receive resources to get Tesco’s attention.