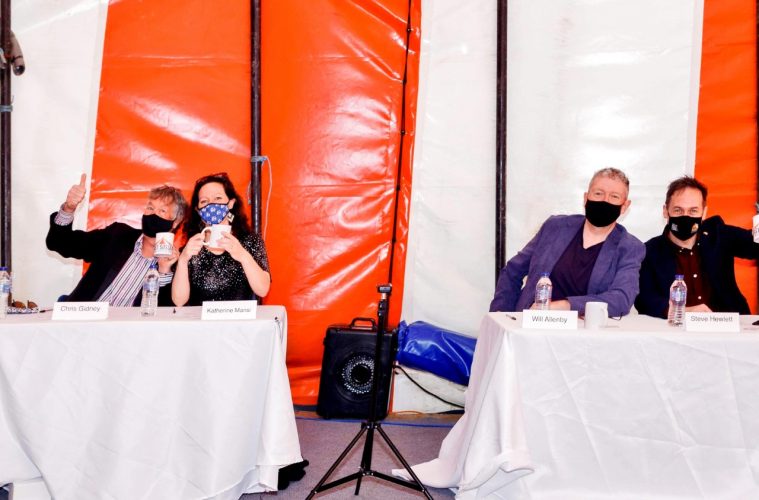 The first showcase performance at the culmination of the very first 20-week circus skills course was a triumph of effort, skill and determination on the part of the performer and the East Sussex School of Circus Arts (ESSCA) team.

After an incredibly hard year for everyone, the ESSCA site had come together to look seriously impressive, a feat only eclipsed by the performance of Jemima Mitchell, the school’s very first student to complete an entire course.

The whole space is a performer’s dream.

It comprises of two big top circus tents filled with all manner of aerial circus equipment, extensive performer/student facilities such as changing areas, showers, a kitchen, relaxation areas and even overnight accommodation, a large outdoor performance space and a picturesque setting including a very pretty lake.

Guests for the showcase were shown around the site by the proud founder, Renato Pires, as he explained how the site could work as a venue for events and shows as well as a circus school.

The larger big top can hold audiences of up to 700 people while the smaller one holds up to 300. A fabulous event last summer involving circus performers using large machinery like JCBs and tractors for their tricks sat around 1,000 people socially distanced outside. With a fully fitted out commercial kitchen on site too, catering for events is a breeze.

Once they were seated in the smaller big top, head teacher, Carlos Gaudencio, talked them through Jemima’s journey, including the fact she had chosen to remain on site alone during the lockdown so she could complete her course as soon as it was possible.

Carlos explained that Jemima had been a total beginner at the start of the course and had worked extremely hard to get to where she was today.

When all was ready, Renato introduced Jemima and she entered the tent wearing a fabulous sparkly mauve leotard. She applied the resin in front of the audience in classic circus style before climbing the silks. Folding herself into a cocoon of silk, she was ready to begin.

The music started, a version of The Show Must Go On from the film Moulin Rouge (very appropriate giving what she had been through), and she began by peeking out of the cocoon, reaching an arm out and finally throwing out the curled-up silks and beginning her routine.

What followed was a passionate, stirring, and theatrical performance of shapes and movements on the silks. She executed her moves with precision and intensity before an exhilarating final flourish and dismount.

After a rapturous applause, the judges conferred to decide on their feedback for Jemima. Their only criticism was that they felt she may have been a little nervous so did not connect with the audience in the way they would have liked to see but, overall, they were very impressed.

One judge commented on her ‘artistic flare’ and said her performance was ‘stylish and well controlled’. All the judges remarked on the level of care which had gone into her training and said he had huge potential for the future.

Discussion after Jemima had left focused around what was next for the circus school. Renato detailed his plans to reopen his regular after-school classes for children which he had created to be a safe inclusive environment for children to learn in.

Classes are designed not just to teach children new skills but also to allow them to build their confidence and self-esteem while moving more especially if they aren’t into traditional sports.

They are also going to be running more of the adult vocational courses like the one Jemima took as well as regular classes for adults. Big plans include offering a circus and performing arts foundation degree from the site.

Renato and the team hope that their circus school and venue will be a hub for performing arts in the area as well as being able to offer something for everyone. The venue will be able to host touring shows of all types in addition to holding events such as corporate events, parties, and weddings. They believe their school will be a centre for learning

performing arts that people from all over the country and beyond will flock to. If you would like to know more about what ESSCA will offer, please call 01323 325957 or email info@eastsussexschoolofcircusarts.co.uk.