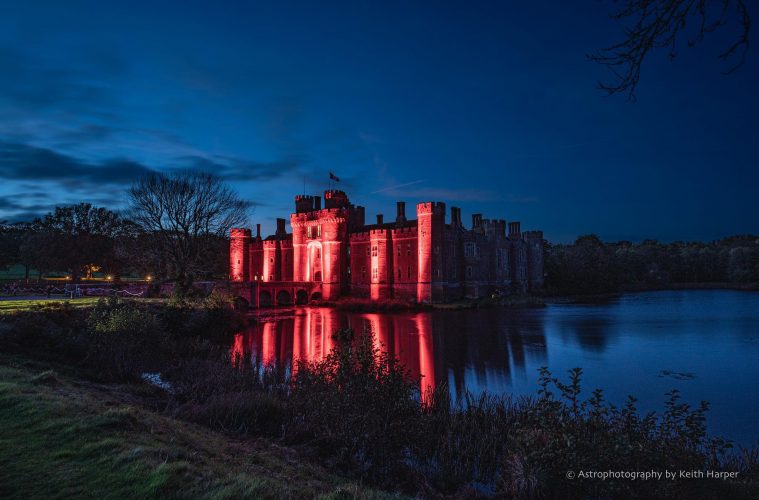 Last week visitors to Herstmonceux Castle were treated to a spectacular sight when the Castle was lit up in stunning ruby red to celebrate the 40th ‘ruby’ anniversary of St Wilfrid’s Hospice in Eastbourne.
As part of the Hospice’s ‘Paint the Town Red’ campaign to mark the significant anniversary the team at the Castle, assisted by local company LM Productions, took on the considerable challenge of lighting the 15th century castle in red and invited the public in to see the stunning sight in person.
Hundreds of supporters turned out for the event, making a donation to the Hospice in return for a warming drink on a chilly evening and the opportunity to take photos.
This came after the team at the Castle also hosted a bake sale in aid of the Hospice and flown a specially designed St Wilfrid’s Hospice flag over the Castle for the anniversary week.
Duncan Adams, Director of Corporate Development at the Bader International Study Centre based at the Castle, said this week: “It was our privilege to be able to support St Wilfrid’s Hospice during this very special week for them. Their work touches the lives of many local residents, at often such a difficult time, and as a significant local landmark we wanted to show our thanks and mark the occasion in a fitting way. It was such a stunning sight and we’re grateful for all those who turned out, took photos and donated.”
Herstmonceux Castle is now closed to the public for the majority of the winter, opening only on certain weekends. It continues though to operate as a centre for international students studying university level courses at the Bader International Study Centre, founded in 1994 and part of Queen’s University, Canada.
This particularly stunning example was taken by local photographer Keith Harper.