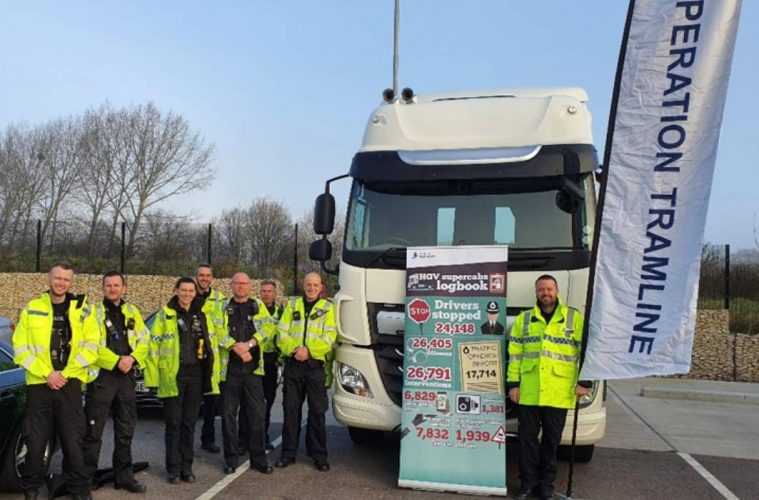 Hundreds of drivers were stopped over mobile phone use at the wheel as part of a road safety campaign.

Officers from Surrey and Sussex Road Policing Unit’s (RPU) Commercial Vehicle Unit (CVU) used an unmarked HGV lorry and unmarked police vehicles in order to detect those who were not in proper control of their vehicle.

Mobile phone use and being distracted while driving are two major factors in why people are killed or seriously injured on our roads each year.

In Sussex, more than 1,000 people were injured in road traffic collisions last year, and 46 of these were fatal.

The CVU used the lorry from National Highways as well as unmarked police vehicles to enforce road safety.

During a week of action as part of Operation Tramline, 173 vehicles were stopped. This included checks on 115 goods vehicles, of which 43 were HGVs.

Because of the size of vehicle, these are the ones which could cause the most harm and risk if there is a road traffic collision.

Our officers found that of the 173 vehicles stopped, 105 were for offences related to mobile phone use.

There were also 49 drivers who were found to not be wearing their seatbelt, which is another major factor in why people are killed or seriously injured.

Sergeant Huw Watts of the Surrey and Sussex Commercial Vehicle Unit, who led the team, said: “It is always disappointing to see that the road safety message is not being received by drivers on the fastest roads in our counties.

“Despite advances in vehicle technology drivers still feel the need to use their mobile phones whilst driving for a number of reasons, from texting and checking emails to watching film clips.”

“This has been a very productive operation for our officers,” the sergeant said.

Sgt Watts also stated that drivers are reminded that the legislation around mobile phones changes on March 25.

Under the current legislation, this operation saw 57 drivers receive three points on their licence and a £100 fine.

But after March 25 these drivers would have seen their penalties doubled.

Sgt Watts said: “Drivers should be warned that any interaction with a mobile phone while driving could see them being stopped and dealt with for the new offence.”