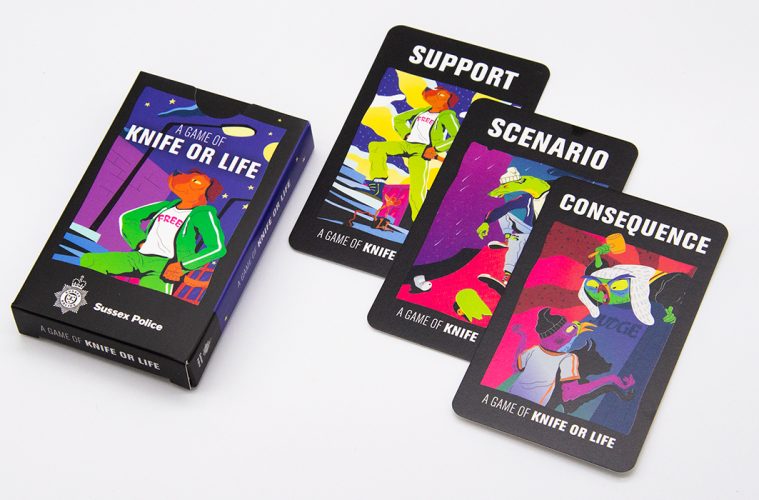 The voice of hundreds of children and young people across Sussex is shaping innovative new tactics to tackle knife crime.

Research exclusively commissioned by Sussex Police and carried out by The Campaign Company showed that 14 per cent of the 11–18 years olds spoken to did not feel safe in their local area, with seven per cent feeling pressurised to carry a knife.

Some children said they were worried about reporting knife crime for fear of being labelled a “snake”. The report, which heard from around 1,000 secondary school children, has led to police working with schools and partners on different ways to engage with young people and raise awareness of the consequences of knife crime.  One of the new approaches being trialled is an educational card game called A Game of Knife or Life. The game looks to stimulate conversation around the implications and repercussions of carrying a blade, while also signposting young people to available support services.

The force has also been using social media as a way of continuing the conversation around knife crime and reaching young people via channels and advocates they trust.  A social media campaign launched at the end of 2020 used images and animations without police branding to promote key messages among young people who don’t subscribe to police channels or who are less likely to look at content coming from a police force. Police have also continued to work closely with partners who were ambassadors for the campaign, sharing content on their social media channels to reach a wider and younger audience.

The knife-crime campaign won a national award for innovation earlier this year, and Sussex Police is already seeing positive results with knife crime down 20 per cent in the last year to October 2021.

“By looking at the underlying reasons why a young person might carry a knife, we are better placed to understand the issue and tackle it at its root rather than once it’s already embedded or escalated. “The research will be used to shape and inform our response to knife crime. An evidence-led approach will be more effective in preventing knife-related crime and violence, helping to keep our communities safe.”

The Game A Game of Knife or Life was designed in collaboration with neighbourhood youth officers using funding from the Home Office to educate young people on the consequences of knife crime. Aimed at 11-16 years olds, the game is an educational resource that looks to stimulate conversation around the implications and repercussions of carrying a blade. It aims to deliver this information and advice in a fun, creative and innovative way but without detracting from the seriousness of the message.

It will be used in schools, youth clubs, at events and by neighbourhood youth officers across the county.   The game includes an instruction manual and two decks of playing cards – scenario cards and outcome cards. To play the game, a game master reads out the scenario card to the group.

This will then create a conversation in response to the scenario, encouraging the group to think and debate on the possible consequences for each situation.

Example scenario: You carry a small knife when out with friends to give you some reassurance if you end up in some sort of trouble. “It’s only a small knife, it won’t kill anyone.” What are the consequences of carrying even a small knife? Example outcome: Get a criminal record. This can result in up to four years in prison; restrict travel abroad to places such as the USA and Australia; impact on your job opportunities following background checks; make it harder for you to achieve your goals and ambitions. The game also includes support cards for those who may benefit from discreet signposting to other services available to offer help and advice. The support cards have contact details for Fearless, where knife crime can be reported anonymously, and Childline.

Wider work The research study and card game are tools that will enhance the work already being done by Sussex Police under Operation Safety – the force’s overall response to knife crime and serious violence.  Neighbourhood youth officers will continue to deliver lessons and educational talks in schools alongside a short film which depicts real life stories of people affected by knife crime.

Officers also use the Op Safety engagement van in hotspot locations across the county such as public parks and shopping centres. This creates an opportunity for engagement with the public, to inform and educate about knife crime. It will also signpost to support services, including for parents who may be worried about their children engaging in crime.

Ch Insp Yates added: “Getting caught with a knife can change a person’s life. We’re committed to highlighting the impact these dangerous weapons can have, giving young people the information and support they need to make changes and be more empowered in the decisions they make.  “Knife crime is a complex issue and it’s not one that can be solved by police alone. To create real long-lasting change, it’s essential that we continue to work closely with our partners, young people and their families on awareness and education.”

Sussex Police and Crime Commissioner Katy Bourne endorsed Sussex Police’s knife crime campaign and said: “It’s essential that we understand what drives young people to carry knives so that we can design and target the most effective messages and advice to help them come to the right conclusion – that carrying a knife makes you more vulnerable to violence and can scar your future forever.  “Sussex Police’s challenging yet educational card game approach was created in conjunction with young people who gave unique insights into their fears and the peer pressure that can lead to people carrying a blade. I was delighted when the Game of Knife or Life campaign won national recognition in the CIPR awards this year.

“My message has always been short and clear: Lose the knife, not a life.”

In the year end to March 2021, officers have engaged with approximately 14,810 young people. Police also continue to work with partners to reach out to young people and signpost them to other services where advice and support is available.

This includes Fearless.org where young people can receive and report information around knife crime anonymously.

Members of the public are also encouraged to report information to police either online or by calling 101. Always dial 999 in an emergency. Information can be reported anonymously via the independent charity Crimestoppers on 0800 555 111 or Childline on 0800 1111.